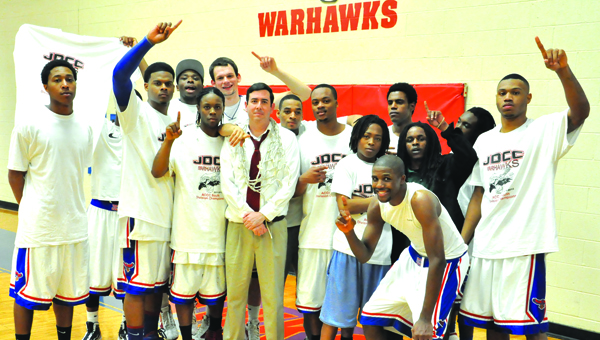 While the rain was coming down most of the day Monday in Brewton, the nets in JDCC’s Warhawk Gym were coming down.
After moving into first place and setting themselves up to win the South Division Championship last week at home as they defeated Faulkner State 105-100 in double overtime, the Warhawks clinched the South Division Championship Monday night at home with a 78-77 win over Wallace State-Selma.
With the win, JDCC improved to 17-8 overall and finished 11-3 in conference play.
“The sophomore kids, when they came in, they just have such a work ethic, pride and the desire to win. I have never had kids like all of them, but in particular Larel Jackson and Turmonte Ragland and Brandon Scott. They just want it so bad that they are just not going to let us lose.”
But the win Monday night almost did not happen.
With JDCC leading by as many as 16 points with 11:07 left in the game, Selma used a late run to take a 72-71 lead with 4:05 left and led JDCC 75-74 with 2:05 left.
JDCC would later tie the game at 75 and take a 77-75 lead after a Turmonte Ragland steal with 1:39 left to play.
Then JDCC’s defense stepped up as the Warhawks got block shots and rebounds including a key block from Larel Jackson with 32.8 seconds left.
JDCC would get a steal, but miss a one-and-one free throw, as Selma would tie the game at 77 with 10 seconds left.
Ragland would make one-of-two free throws with 3.9 seconds left to give JDCC a 78-77 but after a Warhawk rebound, JDCC turned the ball over to the Patriots with 2.3 seconds left in the game. Selma would miss a late shot as JDCC won by one and celebrated the win with T-shirts and cutting down the nets after clinching the championship.
“I think that is Larel’s first blocked shot of the season and it is the one that matters,” Gainer said. “I think that is the kid’s only shot he missed tonight.”
JDCC led Selma 41-34 at the half but was outscored 43-37 in the second by the Patriots.
Both teams were pretty equal in their stats in the game.
The Patriots and Warhawks both had 19 two-point field goals and had nine three-pointers each.
JDCC was 13-for-20 from the free throw line while Selma was 12-for-20.
“You have to hand it to Selma, they did not give up,” Gainer said. “We had them 15 points and should have went on and blown it out, but they did not give up. It was not a matter of us letting down, it was they just stepped it up that much. I think they will also be dangerous in the tournament. First round bye lets us play at 1 p.m. on Thursday. We have as good as shot as anybody now.”
Scott led JDCC with a double-double as he finished with 19 points and 13 rebounds. R.J. Bowers had 15 points, all coming from the 3-point range, and Sherman Presswood had 12.
Turmonte Ragland and Larel Jackson had 10 points each while D.J. Jackson had seven.
Greg Crum finished with three and Adam Stumpf had two points.
Larel Jackson had six assists and D.J. Jackson had four assists. Ragland led with four steals.
JDCC will play at Marion Military Wednesday at 7 p.m. and will end their regular season at Shelton Friday, March 2 at 5:30 p.m. in Tuscaloosa.
The ACCC men’s tournament will begin at 11 a.m. on Wednesday, March 2. The men’s championship game will be played at 7:30 p.m. on March 10. The winner will advance to the NJCAA Division I national tournament, starting March 20, in Hutchinson, Kansas.
JDCC will have a first round bye in the regional tournament and will play the winner of the Southern Union/Chatt. Valley game, Thursday, March 8 at 1 p.m. With a win, JDCC will play in the semifinals Friday, March 9 at 5:30 p.m. against the Marion Military against Faulkner State/Wallace State Hanceville winner.
Last year, JDCC was the No. 3 seed in the south and won their first game at the tournament before falling in game two.
The South Championship is believed to be the first for the Warhawks since the 1975-76 season when JDCC set a school record of going 19-5 in the regular season which is the most wins in school history. JDCC, under the leadership of Frank Cannon, lost to Lawson State in the first round of the tournament that season. JDCC was Jefferson Davis Junior College then and the mascot was the Rebels. 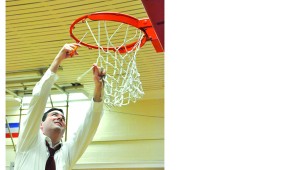