Shehan named citizen of the year 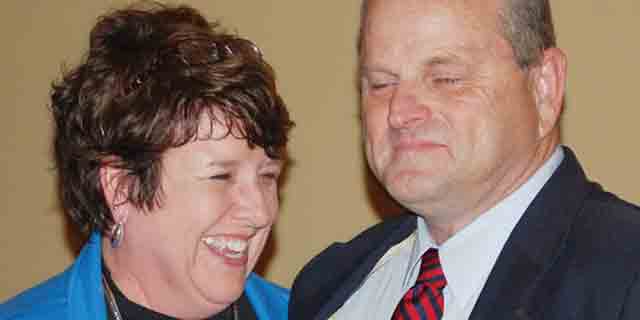 Terece Shehan is joined by her husband as the announcement is made honoring her as The Greater Brewton Area Chamber of Commerce's Citizen of the Year for 2012.

Praised as a selfless servant, tireless worker and talented artist, Terece Shehan was honored Tuesday night as the Brewton Area Chamber of Commerce’s Citizen of the Year.
“A servant leader is usually a selfless leader,” said Shehan’s co-worker Yank Lovelace, who introduced her at the chamber banquet.
Lovelace said Shehan is always willing to serve others, whether her customers or co-workers, and is the “first to volunteer to help.”
“She is never too proud to do the dirty work,” Lovelace said.
“She has a unique ability to listen and show empathy to her fellow workers, church members and family.”
In addition to her work at the Securance Group, Shehan is a faithful member of First Baptist Church, a Rotarian and a garden club president.
She has also been a dedicated volunteer for T.R. Miller High School, painting the field with the school mascot.
“It wouldn’t be homecoming without a Terece Shehan design,” Lovelace said.
He also relayed a story some may not know about Shehan — she once offered to help T.R. Miller volunteer and fan Zeke Johnson cut his hair, and she has been his “personal barber” ever since.
Shehan, who was surprised and teary-eyed when she realized Lovelace was speaking about her, said helping others is simply a natural trait.
“You treat others the way you want to be treated,” she said. “I never thought it would be awarded by the Chamber of Commerce.”
Keynote speaker Dr. Jack Hawkins, president of Troy University, also spoke of leadership.
“Leadership is all about attitude,” he said. “I heard it about Terece as she was introduced. She is a servant leader. Leadership is about service.”
Also recognized Tuesday night were the inaugural winners of the Donnie Rotch and Phillip Ellis Excellence in Achievement Awards.
“These awards are named after two men who spent their professional careers in education making a difference,” said outgoing chamber president Don Ward.
The Donnie Rotch Award, which is named after the late T.R. Miller High School principal, went to Elizabeth Althauser of T.R. Miller.
The Phillip Ellis Award, named after the late W.S. Neal High School principal, went to Kaitlin Hadaway.
Students must be juniors with at least a 3.0 GPA and involvement in extracurricular and civic activities to be considered for the new awards.