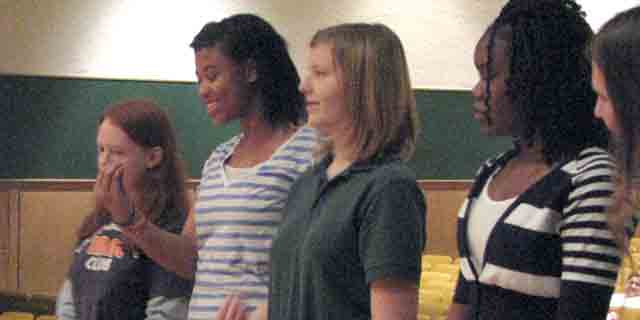 Students auditioned for roles in "The Secret Garden" Monday with week-long rehearsals ending with a performance Saturday at 7 p.m. at the JDCC auditorium.

Brewton area actors will take the stage at Jefferson Davis Community College Saturday night in a production of “The Secret Garden.”

The production, a performance sponsored by the Brewton Council of the Arts, is being directed by members of the Missoula Children’s Theatre.

Some 60 young actors chosen from a field of nearly 90 who auditioned this week will be performing in the play that begins at 7 p.m. Saturday. Dress rehearsal will be held during the hours preceding the presentation Saturday — the culmination of only a week of afternoon rehearsals for the young actors.

Tickets for the event are $10 for adults; $5 for students; $3 for pre-schoolers with children 2 or younger admitted free.

Curtain time is at 7 p.m. at the Woodfin-Patterson Auditorium on the campus of Jefferson Davis Community College on Alco Drive.

For a complete list of cast members, see the Wednesday, Feb. 28 edition of The Brewton Standard or a previous post covering the Missoula audtions at www.brewtonstandard.com.