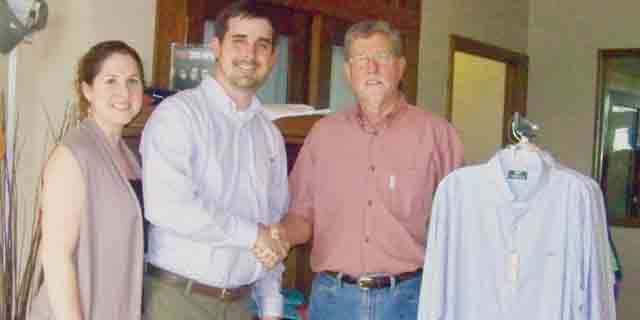 From left, Jenni and Andrew Clark take over the reigns at Weaver's from Sammy Weaver in a recent business purchase.

Weaver’s in downtown Brewton is changing ownership, with Andrew and Jenni Clark purchasing the business from Sammy Weaver.
In recognition of the changes, there will be special Busines After Hours from 5:30 to 7 p.m. Thursday to introduce the Clarks as new owners.
Weaver and Clark said the change came at the right time. Weaver thought about when he would retire, and Clark was looking for a business in which to invest.
“As everyone knows, Weaver’s Apparel and Fine Jewelry has been serving the area for more than 60 years,” Clark said. “Over the years, several changes have been made. The original store was known as Weaver’s Dry Goods  and operated under this name for many years. In the early 1980s, Weaver moved to its current location and began to evolve into the store’s current format.”
Weaver said he is happy to know just where his store is headed. “I hated to close the store and my thoughts were that someone from another generation would be just what was needed,” Weaver said. “I think it is important for someone young and energetic like Andrew and Jenni to do something like this. We need to have more young people to take charge and continue what we began.”
Andrew Clark, who is a vice president commercial lender with BankTrust and president of the Brewton Area Chamber of Commerce, said he had several reasons for making this move.
“We have been working on this for a couple of months, and the transition has run smoothly,” he said. “The time has come to let everyone know what we are doing and why. We also want the customers to know that they will still see the same employees when they come in and things will be just the same.
“There will be a few changes in what we carry. For instance, we plan on carrying a new line of men’s clothing. It won’t be all suits and dress clothes, but will express the more casual way of dressing. Some of the brands will be familiar to shoppers, while others may be new. We want to cater to the Southern gentlemen and carry elegant but casual clothing for men; clothes that will carry them through the day and into the evening.”
Although Weaver will no longer own the business, he will still be seen there.
Weaver plans to continue taking care of the jewelry department and those who choose to buy locally.
“We wanted to make a good transition from one owner to the other,” Weaver said. “He and his wife will be on scene every day. Candy Smith will be the store manager and all the employees will remain the same. I will continue to deal with the jewelry and also to cater to those who wish to make their jewelry purchase by making after-hours appointments. I was born into the business and it makes me very glad to know that it is going to continue in the same classical style. I am thrilled that he is interested in being a part of Weavers. I grew older with our customers and I am glad that another generation will grow with the Clarks.”