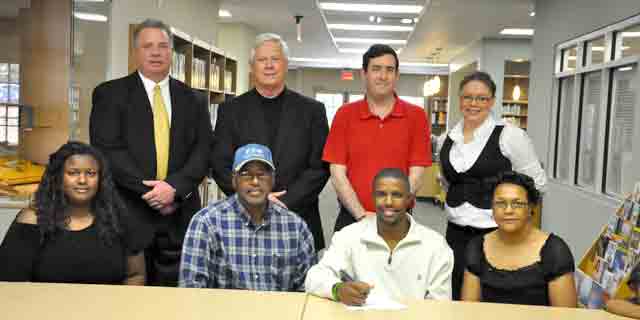 By Lisa Tindell and Adam Robinson
The Brewton Standard

LaRel Jackson, a member of the Jefferson Davis Community College basketball team, had his hard work and dedication to the sport pay off Thursday with the signing of a scholarship offer from Auburn University at Montgomery.
Jackson said JDCC has been a wonderful experience for him and has taught him a lot of things.
“Honestly if it wasn’t for Coach (Allen) Gainer allowing me to walk on two years ago, I wouldn’t have been playing college ball at all, and now I’m on my way to a university to play. However, as a JDCC student and athlete I enjoyed being on campus around the faculty and students, as they have been good to me. I appreciate coach Gainer for giving me the opportunity to play for his team and for enhancing my skill and level of play allowing me to become a better overall college player and student.”
Jackson said he “truly enjoyed” this past season at JDCC with all the accomplishments the team and himself were able to achieve—whether it was when we were on our long winning streak that lead us to win the South Conference Title for the ACCC, or just learning to come together as a team and accomplish even the small simpler things, he said.
“I would also thank my teammates for making me look good as possible while on the court and continuing to push me to become a better player at practice,” Jackson said. “I enjoyed learning more and more about each of them and their personalities on and off the court. The friendships and bonds that we developed will stay with me forever. They will always be another family for me.”
As far as AUM, Jackson said he chose them because of the coaching staff.
“I really feel like that everyone was straightforward with me and they told me they would treat me like their own child,” he said. “I also feel liked their style of play and the tempo at which they play will suit me as a player. AUM head coach Larry Chapman would continuously call me and check on me and wish me the best of luck on my upcoming games and I really appreciated the interest that he showed in me, my personality and my abilities. In all honestly I felt as if I made the correct decision to further my career, basketball and otherwise, with Auburn University of Montgomery.”
Chapman made the trip to the Brewton campus of JD to witness the signing and welcome Jackson to the school.
“If you work hard and do the right thing, it pays off,” Chapman said of Jackson. “He is very deserving of this scholarship and we are glad to have him at AUM. I hope that I don’t purposely do anything to let him, his parents, and the coaches of this college down. AUM just became a better place. This is a business decision for him. This is the biggest business decision he’s made in his life – this full scholarship is worth about $30,000. If he were a freshman it would be worth $60,000. That just shows that hard work is worth something.”
Jackson was surrounded by family, friends and coaches at the signing. Joining Jackson at the signing Thursday was his sister, Kenya Jackson; LaRau Jackson, father; LaRel Jackson; Sandra Jackson, mother. Standing, from left, are David Jones, JDCC athletic director; Chapman, AUM head coach; Allen Gainer, JDCC head coach; and Chiara Perkins, girlfriend.
While at JDCC, Jackson helped lead the Warhawks to two of their best seasons in recent years. In the 2010-2011 season, the Warhawks went 14-13 overall and 10-6 in conference play and advanced to the second round of the regional tournament. This season the Warhawks had their best season since 1975-76. JDCC went 19-10 overall this season and 11-3 in conference play. JDCC won the South Division Conference championship and advanced to the Final Four of the regional tournament before falling to the eventual champion.
Jackson played in 55 games for the Warhawks and compiled 179 career rebounds, 191 assists, 90 steals, six blocks and 313 points with 222 coming this season alone.
“The competitive drive that LaRel exhibited was a huge part of our success the last two years,” Warhawk head coach Allen Gainer said. “He was always ready for any challenge, from shutting down the opponent’s best player to running the team offensively. Most importantly, he is a person of character and a fine example of what we want our players to be on and off the court.”