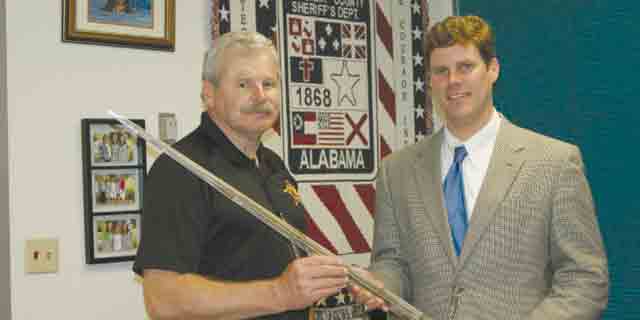 A five-year journey as an officer with the Alabama Sheriff’s Association has found Escambia County Sheriff Grover Smith at the top chain of command for the group after being named president of the group at a recent meeting.
Smith will serve as president of the group in a one-year term and vows to work hard with other officers across the state to help voice concerns to lawmakers on a variety of topics.
“My job will be to chair meetings and appoint committees to help address issues across the state,” Smith said. “We have a legislative committee that will share our concerns with some legislators about issues that a detrimental to public safety. I believe when you have 67 sheriffs across Alabama in support of an agenda that’s good for the public, the legislature will look on that favorably. We will be addressing issues that are in the best interest of the citizens in this state.”
Smith said one issue expected to be addressed during his tenure will be putting some new requirements on anyone hoping to be elected to the office of sheriff in any Alabama community.
“Right now, people can be elected to the office of sheriff without benefit of having any law enforcement training and that needs to change,” Smith said. “We want to see that any person who runs for the office of sheriff meet some minimum requirements before being able to qualify to seek the office. A sheriff needs to be at least 25 years old, be a citizen of the county in which they plan to serve, have a high school diploma or a GED and at least three years of experience as a law enforcement officer.”
Smith said the recommendations for candidate qualifications aren’t meant to limit choices for the office, but to better protect a county’s citizens.
“We don’t want to tell the public who to vote for as sheriff,” Smith said. “We just want to eliminate having someone elected who is ill prepared to serve the citizens. These are very basic skills we’re talking about and we want to make sure those on the ballot have some minimum requirements met.”
Smith said in addition to supporting legislation, the body of the association is also a way to have interdepartmental support in times of emergency. Being a part of that organization puts Escambia County in a good place, he said.
“We have a slogan in the association that ‘no sheriff shall stand alone’,” Smith said. “Back after Hurricane Ivan, we had 156 deputies in this county. That’s because we are part of an interagency agreement to go into a county when we are invited and have the same power as we would in our own county under the direction of the sheriff there. That means when disaster strikes, we don’t have to wait for emergency management officials to call us to help, we can go as soon as we are needed. Those first 72 hours after a disaster are critical in many communities and this process speeds things up for everyone.”
Smith’s journey to become the current president of the association began five years ago when he was named sergeant at arms with the organization.
“It’s a process that you have to work through,” Smith said. “I was sergeant at arms, then secretary/treasurer, second vice president, first vice president and now president. The whole process takes five years to make it to the president’s position with the association. This is something that I’ve had as a goal since become sheriff. I was president of the Police Chief’s Association years ago and knew this was one thing I wanted to do as sheriff. This is just one of the goals I set for myself as sheriff and I believe the experience will make me a better sheriff for the people I work for.”
Smith has served as sheriff of Escambia County since being elected to the position in November 2002 defeating incumbent Tim Hawsey. He was most recently re-elected to the position in 2010 defeating challenger Heath Jackson to begin his third term in the office.