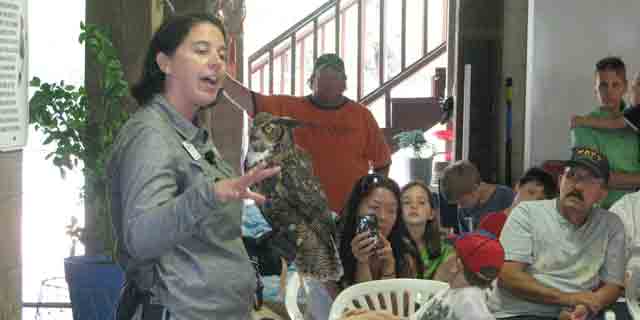 Hundreds of children and adults ventured out to Turtle Point Science Center Saturday for the facility’s annual Spring Fling event.

During the six hour open house event, visitors were treated to a show and presentation of birds of prey including falcons and owls and a variety of reptile.

The birds of prey were provided by the Coosa River Science School in Columbiana. Coosa River is a 242-acre property that hosts almost 4,000 students each year. Students at the center spend classroom time while learning about conservation.

Reptiles were presented by Tim Reno and his wife, Starla, who own Reno’s Reptiles  in Pensacola, Fla. The couple brought a variety of cold-blodded creatures for show  including alligators, bearded dragons, scorpions, tarantulas, pythons, boa constrictors, chameleons and others.

Steve Trash was also on hand to entertain the crowd. Steve Trash is well known for his magic tricks that are also eco-friendly. He has traveled the world to places like Japan, Australia and Canada, as well as the United States. He has appeared on several television programs. His favorite message he tries to get across to both children and adults is, “you can’t do everything to protect our environment, but you can do something.”

The annual event is held each year at Turtle Point. The facility is open year round for research, field trips and other classroom-style learning opportunities.

To learn more about Turtle Point Science Center in Flomaton, contact the center at 296-3401.