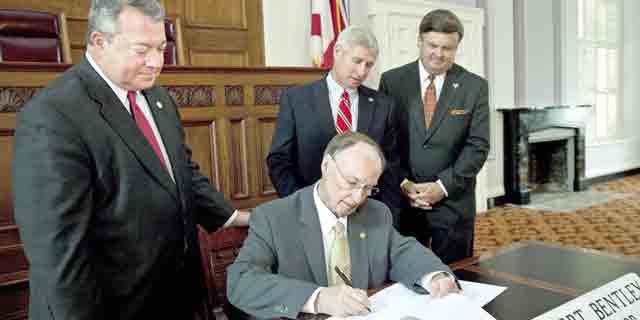 A bill sponsored by Rep. Alan Baker, R-Brewton, was recently signed by Alabama Government Robert Bentley in a special ceremony in Montgomery.

The bill, HB151, was drafted to call for the name of the Alabama Development office to be changed to more adequately reflect the business of the office.

The new name, The Department of Commerce, was accepted and unanimously passed by all voting members.

On hand for the bill signing by Bentley was Greg Canfield, ADO director; Baker; and Rep. Barry Mask, R-Wetumpka who also serves as chairman of the House Economic Development and Tourism Committee for the state.

The bill also changed the name of the director of the department to secretary of commerce.

The ceremony for the bill signing was held April 5 at the State Capitol.