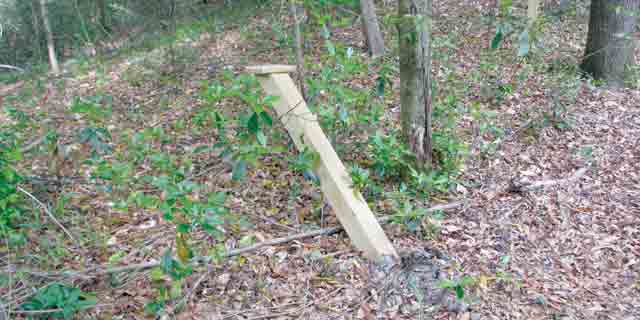 A walk through the nature trail at Fort Crawford Park in East Brewton might be a little less educational this week after apparent vandals took away markers along the route.

Darryl Searcy, one of the organizers of the trails markers, said the defacing and destruction seen along the trail is disheartening for those who worked hard to bring the trail to life.

“The damage is extensive,” Searcy said. “These acts of vandalism are disturbing, disheartening, and discouraging.”

Searcy said the exact date of the destruction isn’t clear, but authorities are working on finding those responsible for the vandalism.

“Some time between Wednesday, March 28, and Sunday, April 1, persons unknown saw fit to visit the Fort Crawford Park Nature Trail to find themselves a measure of amusement,” Searcy said. “These individuals saw fit to destroy everything they saw, giving no regard or respect for property. We have filed a report with the East Brewton Police Department and made a formal request that the gates to Fort Crawford Park be locked each evening and not opened until the following morning.”

Searcy said the majority of posts used as markers for various plant and tree species along the trail were destroyed or completely removed from the trail.

“Numerous 4×4 treated posts are missing completely and others were pulled up and tossed into the woods,” Searcy said. “We must assume that these expensive posts and ID plaques either went home with someone or were tossed into Murder Creek to float downstream.”

Searcy said no damage was done at the entrance to the trail or to the footbridge along the route.

East Brewton Police confirmed the damage to the trail and the filing of the report with the department but said no suspects have developed in the case.

Searcy said a $500 reward has been offered for information leading to the arrest of those responsible for the vandalism.

To report information about the incident, contact the East Brewton Police Department at 867-4686.