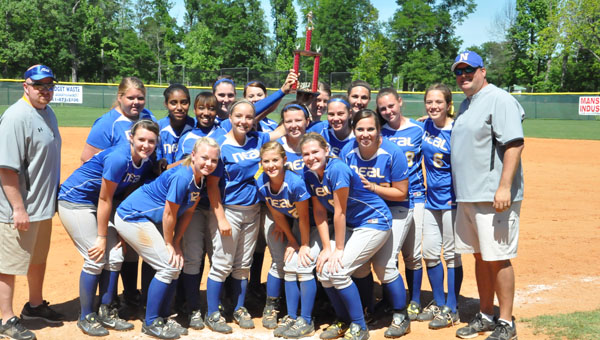 WSN 2, TRM 0
W.S. Neal scored the only two runs of the game in the third inning to defeat T.R. Miller in the first game of the county tournament Friday.
Hadaway earned the win on the mound while Taylor Guthrie took the loss.
At the plate for W.S. Neal, KeKe Floyd, Hadaway, Hinote, and Kena Ellison all had hits.
For T.R. Miller, Leah Brundidge led with a triple and a single.
“I am very fortunate to have the opportunity to work with such a special group of young ladies,” Haney said. “The win over T.R. Miller on Wednesday was a big confidence boost for this team. That confidence showed today and we played the game expecting to win. These girls now have the confidence that they can beat any team they play, whether it be a cross-town rival or any other team on the schedule. We hit the ball hard today. Some of those balls were caught, but we were making good contact. Our hitting has really come alive in the last week or so. Kaitlin had a dominant performance today and did a good job working out of some tough spots.”
White said the hitting slump hurt his team against W.S. Neal.
“Over the last four or five games we have just not been able to get people home,” White said. “We are getting on base and in scoring position but we just can’t get the big hit when we need it. We are just in a slump right now as a team and we just have to keep playing with some toughness and pride and I’m sure we will work it out.”

FHS 9, TRM 1
Against Flomaton, T.R. Miller gave up five runs in the second inning, three in the third and one in the fourth while scoring one lone run in the fourth inning.
Laurel Billy took the loss on the mound for T.R. Miller.
At the plate, T.R. Miller was held to only one hit by Krystal Bell.

WSN 2, FHS 0
W.S. Neal got their second straight shut out and their second straight 2-0 win as they took down Flomaton 2-0 Saturday.
Hadaway allowed one hit on the mound while getting the win. W.S. Neal scored their two runs in the third inning to get the win.
At the plate for W.S. Neal, Floyd, Hadaway, Brown and Jade Danley all had hits.

TRM 7, Atmore 0
T.R. Miller picked up their lone win of the tournament in their final game as they defeated Atmore 7-0.
T.R. Miller scored three runs in the first and four runs in the fourth to get the win.
Billy earned the win on the mound.
At the plate, Guthrie, Audrey Hamric, and Kristen Booker all had hits. Booker had a homerun and a double.

WSN 4, Atmore 0
Facing off against a team that had defeated them twice already this season, W.S. Neal took down Atmore 4-0 to claim the championship.
All runs for W.S. Neal came in the third inning.
Hadaway earned the win on the mound. At the plate, Floyd had a triple while Hadaway, Brown, Anna Nelson, Grantham and Ellison all had hits.