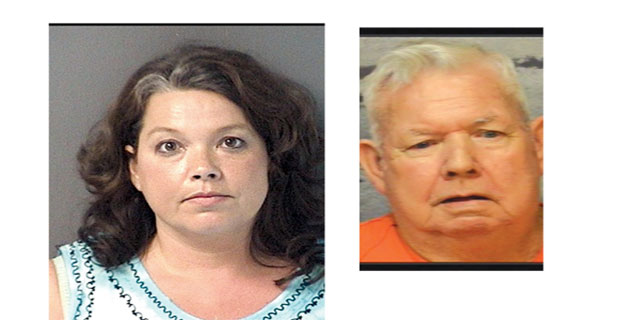 Less than two months after the Feb. 17 robbery of Bank of Brewton’s downtown location, FBI agents and Brewton police officers have arrested two suspects believed to be a part of the heist in what may have been a family plan.
Robin Ann Godwin, 42, of the Bluff Springs Road area in Century, Fla., was taken into custody by FBI agents at her home Thursday night. The location is an RV park just off Bluff Springs Road.
Norman Alvin Godwin, 75, of 1139 Pine Road in Brewton, was taken into custody at his residence Thursday night as well.
Sgt. Steven Ferguson with the Brewton Police Department said the arrests came after weeks of investigation and surveillance by several law enforcement agencies.
“We left no stone unturned in this investigation,” Ferguson said. ‘We had been working the investigation with the assistance of the FBI. Once we cracked these leads in the case with help from other agencies that helped make the arrests possible.”
Ferguson said officers with Brewton police, FBI, Escambia County Sheriffs Department, Escambia County, Fla., Sheriffs Department and U.S. Customs and Border Patrol worked to complete the arrests.
“This investigation is still open,” Ferguson said. “We expect other charges to be filed and other arrests to be made in this case.”
Both Robin and Norman Godwin are believed to be the prime suspects in the Feb. 17 robbery.
Ferguson said surveillance on the two locations where the arrests were made was conducted just hours before the arrests.
“We had help from the U.S. Customs and Border Patrol with aerial surveillance of the Pine Road location and the Century location Thursday,” Ferguson said. “Once we had all of the descriptions for the locations we were able to get federal search warrants signed to search both locations.”
Ferguson said a search at the Pine Road residence turned up a large amount of money believed to be a part of the cash taken in the bank robbery.
Robin Godwin was booked into the Escambia County, Fla., jail as a fugitive from justice. She has been charged with first-degree robbery. She is being held without bond and extradition back to Brewton is being requested.
Norman Godwin is being held at the Escambia County (Ala.)Detention Center charged with conspiracy to commit robbery and first-degree robbery.
Bond has been set at $30,000 on the conspiracy charge and $60,000 on the robbery charge. He remained behind bars as of press time Friday.
Law enforcement officials still have not disclosed the amount of money taken during the robbery.