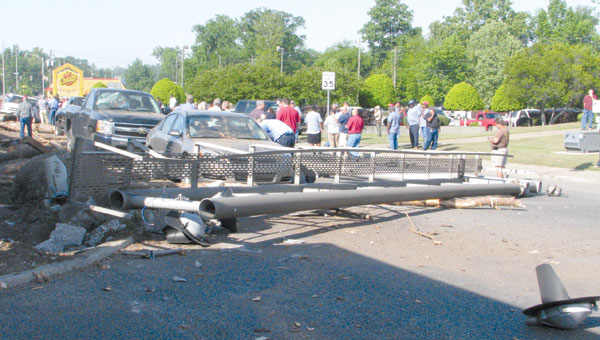 Emergency responders and clean-up crews were on the scene of a crash involving seven vehicles and a CSX train Friday morning.
The crash, which took more than four hours to clear, occured when a log truck loaded with timber attempted to cross the train tracks at the intersection of U.S. 31 and U.S. 41 just before 9 a.m. Friday.
Along with the truck, owned by Johnson Logging of Brantley, eight other vechicles were involved in the crash.
Brewton Police Sgt. Steven Ferguson said an investigation into the actual cause of the crash is under way.
“We have Patrick Caylor working on the investigation,” Ferguson said. “He is our traffic and homicide investigator and will be talking to everyone involved in the crash and witnesses.”
Ferguson said six vehicles receiveddamage in the crash from the logs lost from the truck and other debris from the crash.
“There were some cars that were damaged when the crossing signals were broken and fell to the pavement,” Ferguson said. “Five vehicles on the St. Jospeh side of the tracks and one vehicle on the Mildred Street side of the tracks were damaged. Some of our veteran officers say they’ve seen several crashes at that crossing but never one that had that much damage without someone getting hurt.”
Work crews with CSX and the City of Brewton remained on the scene to assess the damage and to clean up the debris left when the logs from the truck were scattered across the intersection and through the downtown area.
Ferguson said CSX officials are also conducting an investigation to determine the damage to tracks and tressel/overpass near downtown.
The driver of the truck, who was not identified, received minor injuries in the incident. No other serious injuries were reported in the crash.
Witnesses at the scene say logs from the truck and other debris was scattered as far down the track as one-half mile.