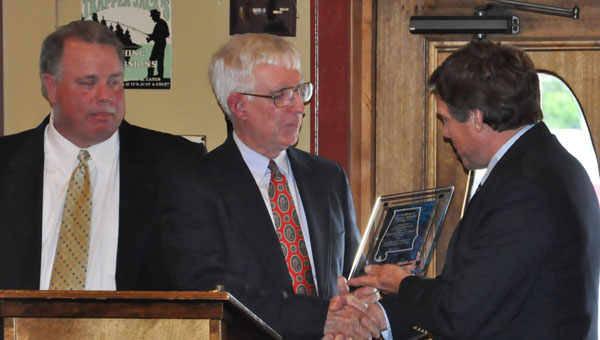 Jefferson Davis Community College Warhawk athletes from the 2011-2012 seasons were honored with a sports banquet Monday night at David’s Catfish.
Athletes from cheerleading, volleyball, basketball, baseball and softball were recognized for their contribution to JDCC during their sports.
Former JDCC baseball coach and recent Hall of Famer Floyd Adams was the guest speaker for the night at the banquet.
Adams coached the Warhawks for 10 seasons, accumulating a record of 303-149 with no losing seasons. He received several accolades during his time leading JDCC including numerous Coach of the Year awards and a trip to the Junior College World Series.
He had more than 100 players sign scholarships, 18 players sign professional baseball contracts with four reaching Major League Baseball and two first round picks.
“Coach Adams brought a new era to baseball,” JDCC athletic director David Jones said. “He was a very hard-noses coach and was direct and expected all he could get out of you.”
Adams told the student-athletes of JDCC that their future was ahead of them and there were more lessons to learn about life through athletics than any other course they may be in.
“Your college years are supposed to be some of the best years of your life,” Adams said. “They should also be responsible years. You are laying the foundation for your future lives at this point. Don’t short-change yourself in the fast lane.”
Adams said why some may think their first priority at JDCC is to play sports, the first priority should be to get an education.
“Baseball or other sports will take care of itself,” Adams said. “If you can play, the scouts will find you. Not all will sign a scholarship, but you need an education to fall back on.”
Adams said there are no shortcuts to success.
“You can have the type of team you want if you work, come together and play and learn your role,” he said. “Not all of you will start, but nobody will give you anything. Anything worth having will be hard to get. Set goals. Set high goals.”
Adams told the athletes of JDCC to learn in life to have a work ethic.
“That will be vital to your success in life,” Adams said. “Work ethics are very important. You have to have confidence and believe in yourself. If you don’t believe in yourself, who will?”
Adams also told the athletes another word for enthusiasm was the word hustle.
“All your coaches will ask you to hustle,” he said. “No one can out-hustle you because it comes from the heart. There will be those that are bigger and faster than you and can do things better than you, but no one can out-hustle you.”
In conclusion, Adams said he had many athletes sign scholarships after college but offered advice to the sophomores who will be leaving JDCC this year.
“Go to school where you will get the best education in your field,” Adams said. “One day, you are going to have to fall back on this education regardless of how many years you will spend in the big leagues. Also, go where you think you will play. The biggest is not always the best.”
Adams was presented a plaque from JDCC in appreciation for all he did for being a teacher, coach, mentor and a friend to so many.
Fresh out of college, Adams took a job as the head baseball coach for Springville High School in the small community of Springville just northeast of Birmingham.
Adams graduated from Escambia County High School in 1952 and began attending Auburn University, where started as centerfielder for the freshman baseball team. In 1954, Adams played for the varsity team at Auburn, but transferred the following year to Howard College, a Baptist school in Birmingham.
Upon graduating from Howard, Adams received his first opportunity to coach at Springville and from there his career took him to several stops.
Adams was inducted into the Alabama Baseball Coaches Association Hall of Fame in Birmingham Jan. 20.

EB Yankees, Rangers and Dodgers get recent wins in…