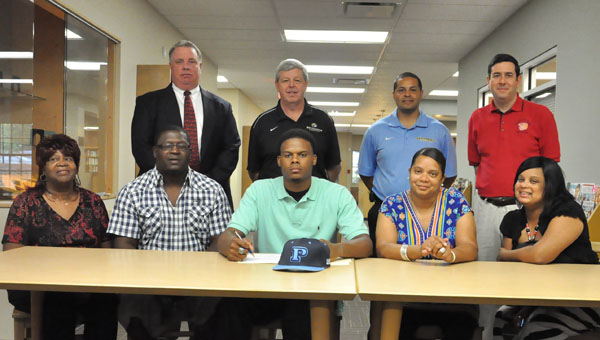 JDCC basketball player D.J. Jackson became the second Warhawk in recent weeks to sign a scholarship as he signed with Point University Thursday at the school’s library.
Jackson helped lead JDCC to one of their best seasons in recent years as they won the South Division conference championship and reached the Final Four of the regional tournament before falling to the eventual champion.
Jackson was joined by family, friends, teammates, JDCC athletic director David Jones, JDCC head coach Allen Gainer, Point head coach Alan Wilson and assistant head coach Bryant Marshall. The Skyhaws are located in southwest Atlanta.
“Point is a great school,” Jackson said. “They were calling me every day and texting me every day. They saw me play at Chatt Valley and said he had to have me. I felt like it was home for me when I went on a visit. It is a dream come true. I want to finish my last two years of college up and know that I will have a degree to support my family and be able to start a family one day.”
Gainer said D.J. did a great job defending the post for his team this year.
“His ability to shoot from the perimeter stretched defenses and gave us more ways to attack our opponents,” Gainer said. “He is a hard worker with an outstanding drive to succeed and I think he’ll do well at Point.”
Point head coach Wilson said Jackson has a chance to start next season.
“No. 1 is he is well-coached,” Wilson said. “They have a good program here. Allen does a good job here and they know how to win especially after the season they had this year. We were looking for some post players and he is exactly what we will need. I think he is going to be a good kid off the court as well as a good player. That is the mold of the type of athlete that Point wants to bring in. We are just really exciting about having him. I think he can fight for a starting position right off the bat. Our post positions are wide-open. If he comes in and works hard, I think he can start.”
At JDCC, Jackson played in 29 games during the 2011-2012 season and scored 197 total points.
He finished with 101 rebounds with 40 coming on offense and 61 on defense. Jackson also had 18 assists, 21 steals and 22 blocks.
He had a season high 22 points against Alabama Southern on Jan. 9.
Jackson was joined by family members: father Derrick Shelby, mom Andrell Shelby, sister Shakea Shelby, and grandmother Rosetta Watford.