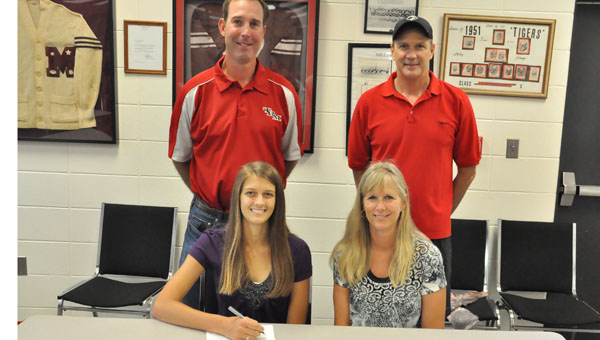 Family: That is one of the reasons T.R. Miller Lady Tiger cross country and track athlete Amber Nelson said she chose the University of West Alabama to sign with Friday at the T.R. Miller Tiger field house.
It is only appropriate that Nelson mentioned family as he reason also as she will now join her brother Brandon at the college who is already there running on scholarship.
“Being able to get a scholarship has always been something I have worked to get,” Nelson said. “I am kind of excited to be part of a team in college. I really liked their team. They are like a family and it kind of reminds me of our team. It will be good to run with my brother, Brandon, again.”
T.R. Miller Lady Tiger athlete Amber Nelson signed a cross country scholarship Friday with the University of West Alabama. Joining Nelson at the signing was mom Pauline Nelson, front right, dad Scott Nelson, back right, and coach Rob Atkinson.
“She has been our captain the last two to three years,” Atkinson said of Nelson. “She has been an incredible influence on our younger kids in cross country and our outdoor track. We really appreciate her example and her attitude.”
Nelson also played volleyball at T.R. Miller.