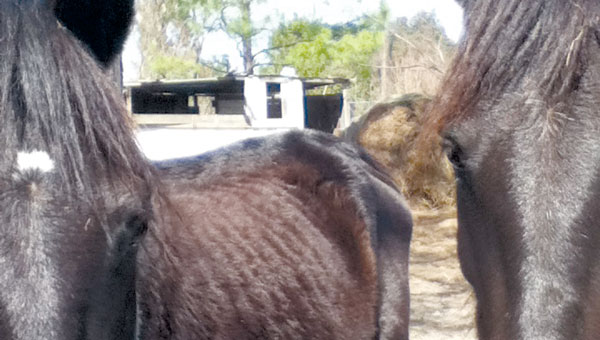 One of five horses, shown, appears to be severely underweight. Fuqua faces five counts of animal cruelty in the case.

An East Brewton man is facing five counts of animal cruelty after being arrested on the charges last Wednesday
William L. Fuqua, 72, male of Victory Street, East Brewton, was charged crimes after officials with the Humane Society of Escambia County investigated reports of the abuse.
Renee Jones, HSEC director, said the arrests came after the owner was warned about the case.
“Several warnings from Humane Society enforcement officers to improve the conditions for the horses was given,” Jones said. “In spite of that, the condition of the horses deteriorated resulting in the criminal charges and seizure of the horses.”
Jones said the horses were deprived of food and water for a period of time leading to the animals being malnourished.
“There was no grass at all where the horses were,” Jones said. “And there was no water on the property. A generous neighbor ran a garden hose from her yard daily and filled containers for the horses.”
Jones said hay and feed was provided sporadically by Fuqua, but had little effect on the horses’ nutritional needs.
“The four mares and one stallion were between 200 and 300 pounds underweight,” Jones said. “The yard they were in was also filled with dangerous debris.”
Jones said the horses have been taken into custody by the Humane Society of Escambia County and are being cared for by the group.
“They have been moved to a better environment and have been seen by a veterinarian,” Jones said.
Due to the severity of the condition of the horses, Jones said they will continue to require medical care and ‘a lot of food.’
“We are in real need of donations to help pay for the vetting, feed and hat that these guys are going to need,” Jones said. “We would appreciate any help.”
The case against Fuqua isn’t the first case of animal cruelty members of the Humane Society have been involved in with investigations and court testimony.
Just last year, HSEC officials assisted in an investigation that lead to charges of animal cruelty against two Atmore residents.
Terrell McNeil and Terrence McNeil were arrested after evidence was found that was consistent with dog fighting.
The McNeil twins were later sentenced to 26 months in prison on an Autauga County conviction on similar dog-fighting charges.
Jones said the Humane Society would continue to investigate and pursue charges on those who are involved in animal cruelty of any kind.
“People who fight dogs are the scourge of the earth,” Jones said. “I hope to always be of help with investigations to stop this activity. With all the work we do to take care of animals, this kind of activity is like a slap in the face.”
HSEC officials can be contact by calling 296-BARK.