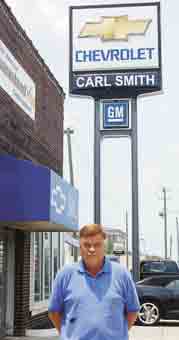 Just days after announcing the sale of Carl Smith Chevrolet to a Louisiana dealer, the dealership’s owner turned himself in to Escambia County deputies.

Smith, 64, was indicted by a Grand Jury and now faces 12 counts of theft by deception in the first degree after allegedly engaging in business deals involving his dealership in which Smith failed to meet the requirements of the sales.

Although the charges against Smith do not clearly define the offenses, sources close to the case said Smith routinely took “trade ins” on vehicles he then neglected to pay off, leaving confused car owners receiving calls from creditors involving vehicles they thought they were no longer responsible for.

Tuesday Smith signed an agreement with Stephen M. Olave, a Chevrolet dealer in Hammond, La., to transfer ownership of the dealership.

Smith turned himself in to deputies around noon Friday and was later released on a $300,000 bond set by the Grand Jury.