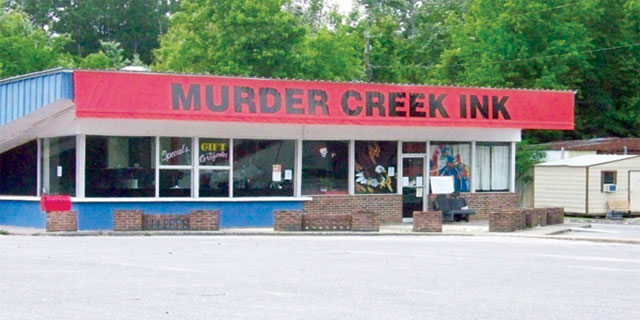 An investigation that spanned nearly two months ended Friday night with the arrest of seven people at an East Brewton business.
A raid was made at Murder Creek Ink, a tattoo and piercing establishment, after police made entry at the Forrest Avenue business.
Sgt. Clemente Brooks with the East Brewton Police Department, said a raid resulted in seven arrests — and possibly the closing of the business.
“We closed the business immediately at the time of the arrests,” Brooks said. “Whether or not the business continues to operate will be left up to the city and the city council.”
Three of the arrests were made for public intoxication while the other arrests were made on a variety of charges, Brooks said.
William Deere, Lavarious V. Bell and Timothy Woods were all arrested for public intoxication.
Also arrested was Traboris L. Woods who was arrested on a warrant from Escambia County, Fla.
Chad Pierre-Louis was charged with possession of a controlled substance – cocaine.
John Rudolph was charged with possession of a controlled substance – cocaine.
Darrell Lane was charged with possession of a controlled substance, attempting to elude and resisting arrest.
Brooks said officers with his department as well as others made the raid and subsequent arrests possible.
“We received assistance from the Brewton Police Department and from the dogs from Atmore with the Department of Corrections in this raid,” Brooks said. “Their help was invaluable in getting the job done there.”
Brooks said the investigation began two months ago when tips concerning the use of drugs and alcohol at the East Brewton tattoo shop came into the department.
“We had some people who were visiting the shop there to come back and tell us some of the things they had seen there,” Brooks said. “We began surveillance on the business with patrols and just staying alert to activity there. Once we had enough information concerning the activity there, we went in and made the arrests and shut the business down.”
The business, which typically operates during evening hours, was closed immediately at the time of the raid. City officials will address the issue to consider the future of the business.
“We had been watching the business through the evening Friday and went in on the raid around 11:30 p.m.,” Brooks said. “Once we got inside the business we found drugs and lots of alcohol on the premises. We did notify the city about what we found there and they will decide how to proceed from there.”
A “we’ve moved” sign was posted at the entrance of the East Brewton business Tuesday.