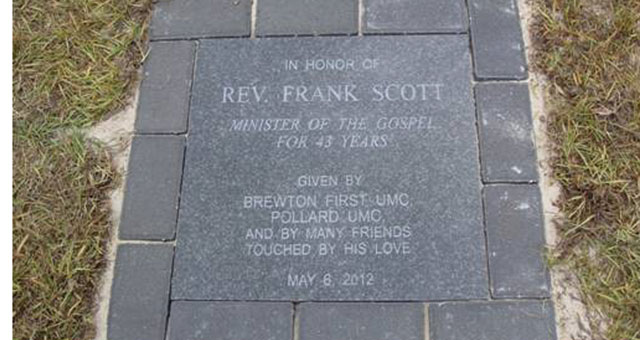 A plaque was placed near the prayer labryrinth at Blue Lake Camp to honor Frank Scott.

The Rev. Frank Scott, retired minister with the United Methodist Church, was honored during the Annual Blue Lake Family Day May 6, at Blue Lake Camp near Andalusia.
During the ceremonies, the Frank L. Scott Prayer Labyrinth was dedicated and given in tribute by the many people who know and have been associated with Scott.
“We wanted to do something special for Frank,” said Dr. Ed Glaize, pastor of First United Methodist Church in Brewton. “He was a part of the group of people who originally established Blue Lake. He retired after 43 years and came back to his hometown of Brewton, he served as pastor at Pollard United Methodist Church for seven more years. The church at Pollard was a great help getting this labyrinth built at Blue Lake.”
“When we asked the Trustees of Blue Lake Assembly what they needed, the idea of the prayer labyrinth began,” he added. “We got donations to get it done and many worked on it. Carol Graves designed it and Terrence and Becki Breckenridge had the builders put it all together. Many others also worked on getting it done in time. Frank showed up and had no idea what was going on.”
Scott acknowledged he knew nothing about the plans for the ceremony.
“Everybody kept insisting that I had to go to Blue Lake, and I thought I had to stay at home to look after my little dog, Mattie,” Scott said. “I didn’t know anything about the honor until they started the little ceremony. I was totally surprised.”
The church members spent the day in fellowship, eating barbecue, swimming and riding paddle boats.
Blue Lake began in the late 1940’s near Andalusia, and in the beginning was truly a camp with outside cooking and sleeping in tents. In the early 1950s a lodge and cabins were built to accommodate Methodist campers from all over south Alabama. Today, Blue Lake has several types of lodging and activities and can handle small or large groups.
The idea of a prayer labyrinth symbolizes pilgrimages for those who could not afford to actually make the trip to the Holy Land in ancient times. The labyrinth was used instead to make a pilgrimage not to a place, but to the center of one’s soul.
Frank Scott is a native of Brewton and graduated from T.R. Miller High School. He attended Birmingham Southern College and earned a bachelor’s degree in history from Troy State University. His first charge was in Ariton with seven churches in the charge making $1,800  a year. He went on to serve in the United Methodist Alabama-Florida Conference, retiring in 1994. He returned to his hometown of Brewton, but served as pastor of the Pollard Untied Methodist Church for seven years. He retired again in 2003 and now is a very active member of First United Methodist Church in Brewton. He has also been an active participant in Habitat for Humanity.
He was married to the former Ann Fowler of Andalusia and they became the parents of three children, five grandchildren and one great-granddaughter. Ann Scott died in 2002 and Frank Scott lives in Alco, with his dog, Mattie