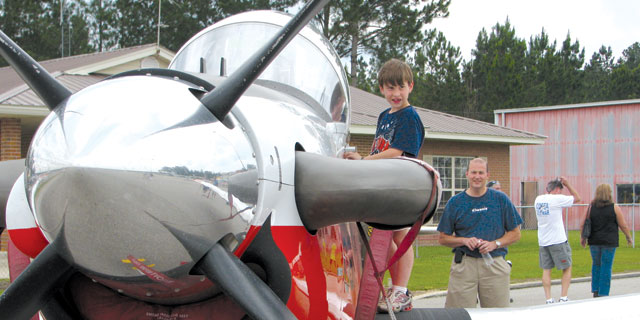 Matthew Kirkland takes a close look at a Naval airplane during Saturday's annual Spring Fly-In at the Brewton Municipal Airport.

Even with the threat of rain, hundreds of visitors filled the tarmac at the Brewton Muncipal Airport for the annual Brewton Spring Fly-In event.

Freddie McCall, airport manager, said the participation by exhibitors and visitors made for an enjoyable and successful event.
“Overall I think it was a great success,” McCall said. “We were missing a few planes and motorcycles, but on the whole it went off very well.”
The annual event is held in an effort to bring attention to what the aiport facility has to offer to the community it serves, McCall said.
“The whole plan to begin with was to inform the community of the valuable asset the airport is to the area,” McCall said. “We had good support from our local people, so the word is getting out.”
Currently, the facility has opportunites for those interested in learning how to fly an aircraft as well as being available for private and commercial landings, McCall said.
Saturday’s event wasn���t only beneficial for the airport as a publicity event, McCall said he believed the community benefitted far beyond getting to see aircraft up close.
“We also had people who came in from at least four states,” McCall said. “We had people from Mississippi, Florida, Alabama and Georgia who came. The good thing for the community was that those folks spent money while they were here, so the community benefited from the event, even though the whole show was free to anyone who wanted to be a part of it.”
Weather forecasters had predicted a heavy rain for the area for the majority of the day. But, McCall said, those predictions didn’t dampen the spirits of thos who enjoyed the event.
“Everybody thought the rain was going to ruin the day, but it didn’t,” McCall said. “There were a few who decided not to come, but on the whole, it was a good day. The rain held off until about 2:30 p.m. and then we only got a sprinkle.”
McCall said plans are already under way for the 2013 event.
“We are already planning for next year,” McCall said. “The day has been planned for May 11, 2013.”
The 2012 Fly-In marked the third year the event was held.
For information concerning services offered at the Brewton Municipal Airport, contact McCall at 867-9997.