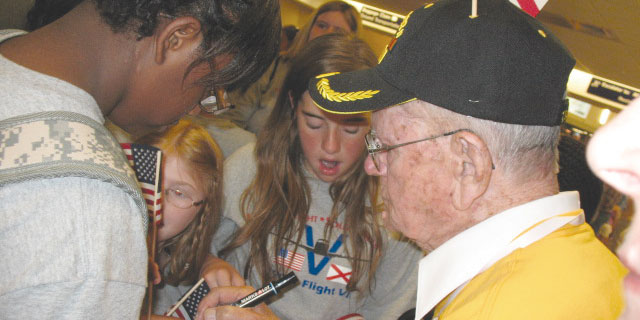 Lambeth signs flags for students of Project Eagle upon his return from Washington, D.C. last week.

James Lambeth received a hero’s welcome last week from hundreds of well-wishers on hand to welcome members of the seventh Honor Flight back to Alabama at the Mobile Regional Airport.
Among those showing their appreciation as the World War II veterans returned from the day-long trip were members of the Project Eagle group from W.S. Neal Middle School.
The students, along with teachers and parents, had been a part of Lambeth’s sponsorship that got him on the plan for the special honor trip.
Kina Burkett, director for Project Eagle, said the students became excited about the possibility of sending a veteran on the Honor Flight early in the year.
“What was a requiremet of this program turned out to be the best learning experience not only the students, but all that was involved in making this the most spectacular event ever,” Burkett said. “Since we’ve been back from the trip, I have talked to all of the students that went on the trip and each of them say the same thing, ‘This experience has changed my life.’”
Students in the program worked to create a cookbook to sell to help raise the funds to make the trip possible for Lambeth, Burkett said. That experience has encourged the group to move forward with plans for another fundraiser to support another veteran.
Burkett said the students, joined by teachers for the group and a few parents, made the trip to Mobile last week to be there when Lambeth landed following the trip.
“This has been such a wonderful thing for them and for all us,” Burkett said. “They worked really hard putting our cookbook together and were excited about what they were doing. After meeting Mr. Lambeth, they really got excited. As a matter of fact, they want to go again and are already thinking ahead to the next Learn and Serve project.”
Burkett said the experience wasn’t just interesting and educational for the students, she too was touched by the experience.
“All of this has just been wonderful from the start,” Burkett said. “It has certainly changed my life.”
Lambeth, a veteran of World War II, also served two tours of duty in the Korean War.
Dr. Barry Booth, a Daphne dentist, helps to coordinate the Honor Flight of South Alabama.
“The program started in 2005,” Booth said. “The veterans are given the opportunity to go on the Honor Flight all expenses paid because of contributions like this.”
Booth said World War II veterans are decreasing in numbers and the importance of making them a part of the program is imperative.
Honor Flight Network is a non-profit organization created to honor America’s veterans for all their sacrifices. To learn more, visit the Honor Flight Website at www.honorflightsa.com.