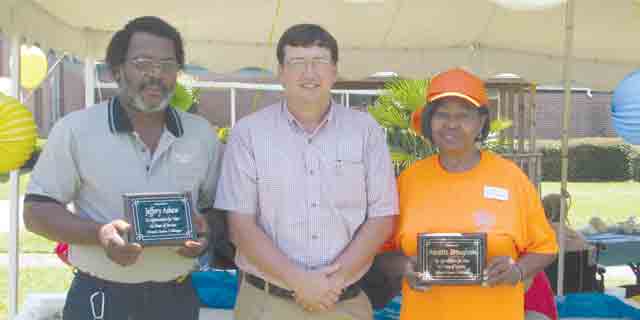 With a combined 80 years of experience two members of the staff at West Gate Village were honored during ceremonies held in honor of National Nursing home week.
Anette Broughton was honored for being a part of the West Gate staff for 43 years.
Jeffrey Askew received a plaque in recognition of his 37 years of service.
Administrator Mark Manning said the honors were well deserved. “We are lucky to have these two as a part of our staff,” Manning said. “We are happy to honor our employees with service awards for the hard work they do for the residents here at West Gate.”
The awards ceremony, held Thursday, and a cookout for staff and residents on Friday were both held as the finales to a week of activities during Nursing Home Week, Manning said.
“We like to do this every year for our employees and for the residents,” Manning said. “We’ve had a number of activities throughout the week that have allowed our staff, residents and family members to mingle. The cookout is a great way to end the week that we observe every year to thank our staff for what they do for West Gate Village and the residents.”
Broughton said she has enjoyed her time at West Gate because it allows her to help others.
“I like to work and be around people when I feel like I’m helping someone,” Broughton said. “Some people just get into your heart and there’s always somebody here to help.”
Broughton said her position in the hydration department of the facility is challenging but gives her a chance to help residents — the heart of what she loves.
“It doesn’t take a lot to make someone’s day,” Broughton said. “Just doing simple little things can make their day. It’s my job to monitor intake of liquids and to encourage residents to drink more. Sometimes I have to do a little dance or a little shake to get them to do it, but it certainly works.”
Broughton said she hoped to work for a couple more years before retiring.
“I retired once and came back part-time,” Broughton said. “I ended up back here full-time. But, in another two years, I’ll retire for good.”
Askew, who works in the maintenance department at the facility, said his interaction with the residents and nine children at home have kept him on the job for nearly 40 years.
“Having that many children kept me on the job,” Askew laughed. “But, I have really enjoyed my time here. Being with the residents here is like being in a neighborhood. I grew up around some of the people who live here now. It’s just a great place to be.”
Askew said he plans to retire after six more years.
Manning said the staff at West Gate Village is one he is happy to honor.
“It’s nice to have a whole week set aside to recognize nursing homes and what they have to offer,” Manning said. “One of the best things we have to offer is our staff.”