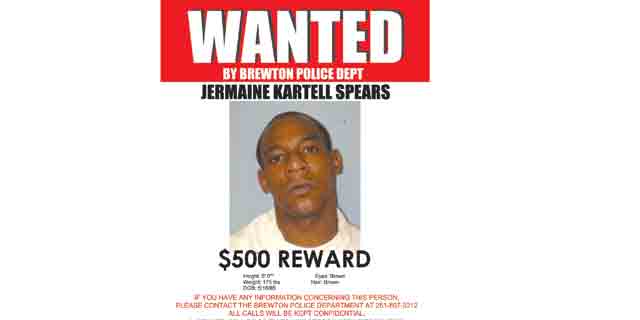 A Brewton man continues to elude police since he became wanted on domestic violence charges last month.
Sgt. Steven Ferguson with the Brewton Police Department’s investigations unit, said the suspect has been spotted a few times in recent weeks, but he continues to avoid capture.
Jermaine Katrell Spears is a suspect in case of domestic violence that occurred in mid-May at the Colonial Manor Motel, Ferguson said.
“We are searching for Spears on domestic violence charges,” Ferguson said. “Officers followed a tip Thursday and were able to spot Spears. We got some help from the tracking dogs in our search. The dogs were able to pick up a trail and we followed it until it came out onto a roadway. Since the dogs lost the scent, we believe someone was there to pick him up. We are still searching for Spears and a reward is being offered.”
Investigator Patrick Caylor said a warrant for Spears’ arrest was issued stemming from the incident that took place at the motel.
“We have evidence that the suspect had an altercation with a girl that he had a relationship with for a period of time,” Caylor said. “He is believed to have gotten into an argument with her over a comment and it escalated. We believe he took her to a room at the Colonial Manor where he is suspected of causing her bodily harm.”
A search for Spears has been on-going since the incident and the warrant issued, Ferguson said.
Anyone with information on the whereabouts of Spears is asked to contact the Brewton Police Department at 867-3212.

Madden: No sewage in creek