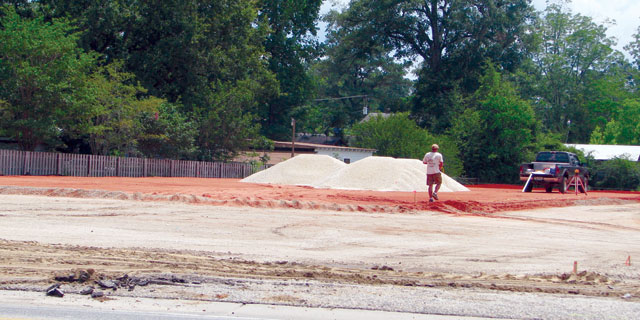 The tax base in East Brewton is looking up with the announcement of a new business coming to the city.
East Brewton Mayor Terry Clark said work with officials with Dollar General has resulted in the company’s decision to construct an East Brewton location for the chain store.
“We had been talking with Dollar General officials for a little over a year,” Clark said. “At one point, we thought we had lost them. But, we continued to work with them and are happy that they’ve made the decision to make East Brewton home for their newest store.”
Clark said the company made the decision and notified city officials after the first of the year with construction at the site already begun.
“The store will be located on Forrest Avenue near where Fred’s is now,” Clark said. “This will give our citizens a chance to purchase things they need every day right here in East Brewton.”
Clark said the tax revenue for the city from the new retail outlet will be a blessing to the city budget.
“This new business will give us some added revenue that we need to help our efforts in continuing services for the residents of our community,” Clark said. “We have been working hard to bring new business to East Brewton and we are delighted that Dollar General will become a part of what we do in East Brewton.”
Clark said the new addition coupled with the planned opening of Maxwell’s convenience store will be good for the area.
Richard Maxwell, owner of the proposed convenience store, also owns a similar outlet on Shoffner Street in the city. The store, located on Forrest Avenue near Superfoods in East Brewton, is currently under renovation with plans to open in July.
“We have been told by Dollar General officials that the store could be open in four to six weeks,” Clark said. “That means by late July we should have two new thriving businesses in this community. It’s a good day for East Brewton.”
Construction phases for the store will include site preparation, which is already underway. Although officials estimate up to six weeks to complete the retail store, weather may play a role in how quickly the construction is completed.
No specific date has been set for opening of the store.