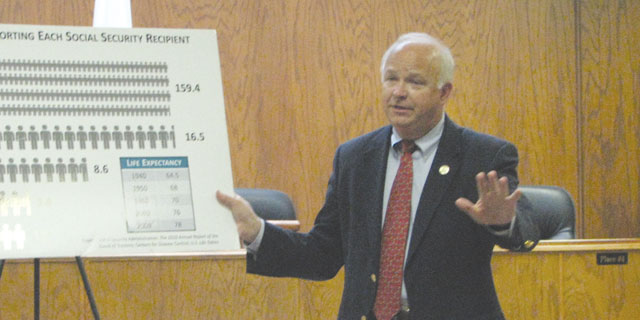 Congressman Jo Bonner’s visit to East Brewton Thursday gave the official a chance to address the issues facing citizens in the United States when it comes to finances.
“We owe too much money and we have way too much debt,” Bonner said. “If we don’t make some changes, we will go off the cliff.”
Bonner referred to the nearly $16 trillion dollars of debt the country now holds, saying government progreams would end if changes aren’t approved.
“The real drivers of the debt is Social Security and Medicare,” Bonner said. “I believe we can guarantee if you are on Social Security or five or ten years away, it will be there for you. But, if you’re only 20 or 25 years old, we’re going to have to do something of Social Security is going to be there for you. If unchanged, we won’t have it in 15 years.”
Bonner told those attending Thursday’s town hall meeting that Medicare’s future was more in doubt than that of Social Security.
“If we don’t change something soon, Medicare will be gone in about eight years,” Bonner said. “We are all going to have to give a little and work harder. Most people will probably be working two or maybe three years more. Both Social Security and Medicare are good programs that have helped a lot of people stay out of the poor house. But something must be done.”
Although Bonner gave no concrete answers on what could be done to save the programs, budget cuts and cutting the debt would be a good start toward saving many government programs, he said.
“The debt we have in this country would require each person to pay $73,000 if the debt were called today,” Bonner said. “Other countries own 46 percent of our debt. We need to commit to work together to cut spending, cut our debt and make sure the best days of America are ahead of us.”