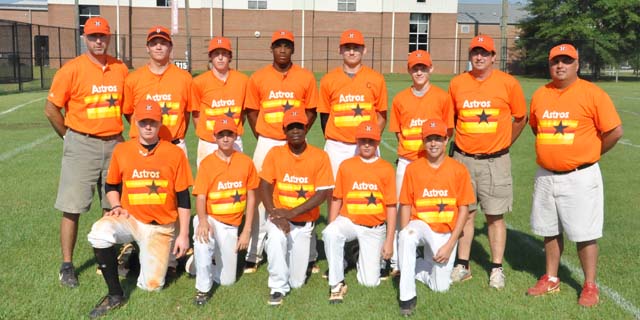 The Brewton Babe Ruth Astros had to wait an extra day to officially celebrate their 2012 league championship due to rain Thursday night, but they were able to celebrate in a big Friday as they cruised to a 14-3 win over the Phillies.
The win for the Astros finished them with a 21-3 record as they took first place in the four-team league. The Braves finished in second place with a 13-10 record followed by the Padres in third place with a 9-14 record.
The Phillies ended their season with a 4-20 record and finished in fourth place in the league.
The game Friday was picked up in the bottom of the second inning with a 2-0 lead for the Astros.
After scoring one more run in the inning after the resuming of the game Friday, the Astros used an 11-run third inning to blow the game wide open and take a 14-0 lead.
The Phillies would get all three of their runs in the top of the fourth to cut the lead to 14-3, but that would be as close as they would get as the Astros claimed the win by 11.
Tyler Joyner earned the win on the mound for the Astros as he went four innings and allowed one hit, no runs, walked two and struck out six.
Lane Clark went one inning and allowed three hits, three runs, walked one and struck out none.
The Astros pounded out 12 hits in the win. Jones Manning added a single and an RBI while Joyner had two singles and a double and one RBI.
Mike Williams had a single and one RBI and Dylan Etheridge added two singles, a triple and three RBIs.
Taylor Elliott finished with a double, a single and one RBI and Tim McDonald and Dalton Shell added a single and one RBI each. Stokes Jennings added an RBI.
For the Phillies, Jake Najor added a double while Hunter Brittain, Jared Cooper and Sam Frazier all had a single each. Brittain had two RBIs.
Tyler Baxter took the loss on the mound for the Phillies as he went two innings and allowed eight hits, nine runs, walked three and struck out one.
Jordan Williams went the final three innings and allowed four hits, five runs, walked and struck out none.

Brewton and EB 12U all-stars to play in Brewton