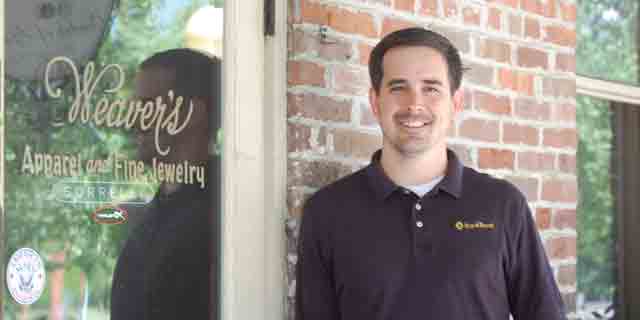 Andrew Clark outside Weaver's, the business he owns with his wife.

Andrew Clark feels lucky to be able to raise his family in his hometown. But the city itself may be the lucky one as it benefits from the many roles the young leader has taken on.
Halfway through a term as president of the Greater Brewton Area Chamber of Commerce, Clark is also a vice president at BankTrust and the new owner, with his wife Jennifer, of Weaver’s Apparel and Jewelry, a business they are expanding with new clothing lines.
For Clark, the opportunity to return to his hometown was a natural fit.
“Things are going really well for us right now, and I’m glad we came back to Brewton,” he said. “I think a lot of those who left have made the same discovery. It’s a great place to raise our son, and I think it couldn’t be any better.”
Clark graduated from T.R. Miller High School in 1997, and then attended Jefferson Davis Community College for two years, before getting his degree in marketing from Troy University in 2002.
Clark was wearing many hats even as a young person growing up in Brewton.
“I worked at Winn-Dixie while I was in high school and college,” he said. “I still maintained a pretty good grade point average in school, and played baseball for T.R. Miller. We went into the playoffs my senior year, and although we didn’t win the championship, I was voted MVP for the team in 1997. I really enjoyed playing baseball, but I knew I needed to direct my goal to something that would take care of me and my family later on in life. I wasn’t good enough to depend on sports to take care of my future.”
Clark’s attitude is what has led him to the position he holds now as vice president of BankTrust Bank in charge of private banking.
Clark’s first job after college was at HSBC in Dothan, where he worked as a mortgage loan officer. He then went to Birmingham in 2003 to serve as a loan officer. The next year he got the opportunity to move to Montgomery as a branch manager of Countrywide Home Loans. His work there as gave him the opportunity to move up in the company to corporate sales, buying loans from other banks. He spent a of time flying from state to state. That was also the year he and Jennifer Andrews were married. They had been dating since 1996.
“It was an exciting job, at Countrywide,” Clark said. “I was always meeting new people and I learned how to listen. Listening is very important and some people have a problem with it.”
But the job didn’t last long as the company went through some changes and his position was eliminated.
A new position became available with Regions Bank in private banking doing a little bit of everything. Clark said his clients were those who didn’t have a lot of time. They needed him to take care of their needs.
It was while he was working at Regions that he talked with a lady that knew he was from Brewton, and found out there was an opening at BankTrust in Brewton. “I knew that Brewton was a great place to live so I came to BankTrust and had an interview. The same day I decided to accept the job, my wife and I discovered that we were pregnant. We knew then that we had made the right decision. My first day on the job was May 2008 and our son, William, was born that year.”
If banking takes up most of his time, Clark has other interests. Most recently he bought Weaver’s Fine Apparel and Jewelry, a long-time business in downtown Brewton. He added eight new lines to what was already there, giving men a place to buy quality clothing.
“It was something I had always wanted to do,” Clark said. “I felt that Brewton needed a good place for men to shop for good brand name clothing. So far, it has been doing very well.”
Added to all that is the fact that he also owns several rental properties around town. Clark never has much leftover time, but when he does, he goes bow hunting.
“Hunting is a passion of mine,” Clark said. “My wife likes to hunt too, so she understands when I want to go hunting.”
But Clark turned his passion for hunting into yet another opportunity for Brewton, creating the first Big Buck Contest for the chamber of commerce, a venture which has helped raise money not only for the chamber but also for Alabama Hunters Helping the Hungry and the Catch a Dream Foundation.
The contest wrapped up at the end of hunting season this year but will be back next year with hopes of growing its popularity and impact, Clark said.