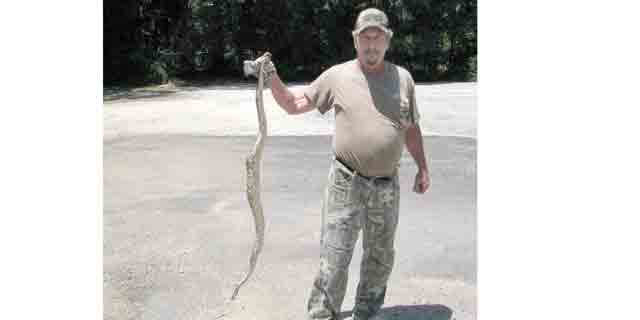 Fuqua holds a rattel snake killed in his garden at his home on Nalty Road.

Fred Fuqua didn’t know Thursday would be his lucky day, but even with a rattle snake striking at him, he agreed that it was indeed a lucky day.

Fuqua, who lives on Nalty Road just outside of Brewton, said he was working in his garden when the snake made its appearance.

“The snake actually bit me,” Fuqua said. “But, I have a prosthetic leg, so it didn’t hurt me.”

Fuqua said the snake never sounded its seven rattles before making the strike on him.

“It didn’t make a sound until it kicked it off my leg,” Fuqua said. “I was able to get a brick and throw it on the snake. That stunned it long enough for me to get my gun and shoot it.”

Fuqua said he had lived at his Nalty Road address for many years and had never had any issues with snakes at his home.

“I’ve killed snakes out there before, but never right in my yard,” Fuqua said. “I have my garden right in my yard and that’s where the snake was. I guess it was my lucky day after all.”

The snake, about five feet long, had seven rattles and button — a souvenir Fuqua now has.

“I used to make belts and things with snake skin,” Fuqua said. “I don’t do that anymore. I know some people who eat snakes, but I don’t do that. I did cut off the rattles and button to keep.”

Fuqua said the season for snakes to be venturing through the area is at hand and he urged caution for those heading outdoors.

“The snakes are sure crawling,” Fuqua said. “Folks around here need to be careful.”