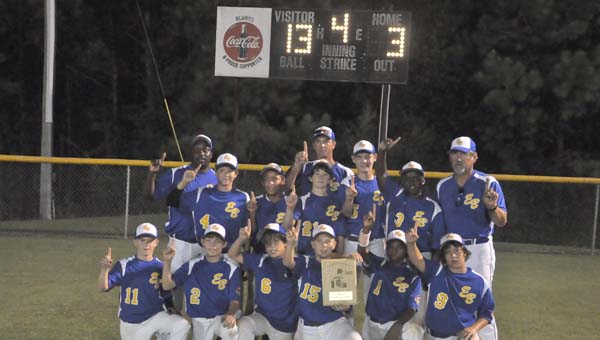 The East Brewton 12U all-stars had to wait an extra game to celebrate a district championship Monday night in Brewton, but in that extra game, the team rolled to a decisive win over Brewton in four innings to claim the championship.
It was the second district championship some of the players on the Escambia County team with East Brewton and Flomaton players that won the district title during their 10U season in 2010, on the same field in Brewton that they won it on Monday night.
“It feels great to be district champion,” East Brewton manager Danny Parker said after being dunked with a Gatorade bath. “These kids have really worked hard and I am just proud of them. They have some talent and when you get it out of them, they play good ball.”
East Brewton clinched a berth in the title game Sunday after sweeping through their competition with a 3-0 record—a record that included a 6-4 win over Brewton Saturday.
Following the loss to East Brewton Saturday, Brewton earned two wins in the loser’s brackets Sunday over Opp and Covington County to clinch their spot in the championship.
Having to beat East Brewton twice Monday in the championship game to win the district crown, Brewton rallied in the final inning with two outs to earn a 5-4 win and face a second game Monday night with the winner of the second game claiming the title.
In the second game, East Brewton used an eight-run fourth inning to break a 5-3 tie to get a 10-run win by a score of 13-3 in four innings to win the championship.
Brewton manager Ed Williamson said despite the loss, he really liked his team’s heart.
“I thought they fought hard,” Williamson said. “I think our pitching kind of got thin in the last game, but everybody battled. The kids kept working hard and they tried their best. I am just really proud of them.”
With the win for East Brewton, the team will advance to the state tournament in Demopolis July 6.
As runner-up, Brewton also clinched a spot in the state tournament, but declined the option to go citing reasons that affected the team would make them unable to make the trip.
Overall, East Brewton finished 4-1 in the tournament while Brewton went 4-2.
For a full recap of games and some play-by-play action, see Wednesday’s edition of the Brewton Standard.

Brewton 12U begins tournament with win over Evergreen, to…