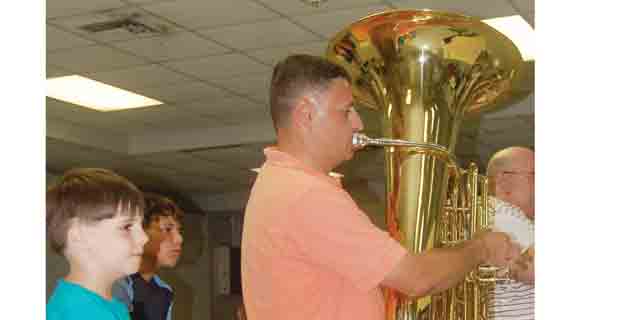 Landan Madison looks on has his father, heath Madison of Brewton, rehearse as part of the Escambia County Community Band.

For Nolan McNally, the challenge was worth it.
He and a fellow recent graduate from Flomaton High School Jake Cannon were talking about the idea of a community band, and Cannon threw down the gauntlet, McNally said.
“He said, ‘You can’t do it,'” McNally recalled.
So McNally took the challenge, and in a few minutes they had a list of 40 names.
That idea has grown into a county-wide community band — with a few members from outside the area — who will perform their first public concert at 2:30 p.m. Saturday at the Escambia County High School auditorium.
The band members have been practicing twice a week throughout the month, meeting Monday night at the band room at Flomaton High School under the direction of John Lambert. T.R. Miller High School band director Lance Gainous is also part of the group.
Band members range from students and recent graduates to more mature musicians.
“We’ve got people who haven’t played in 30 years, who haven’t done it since high school,” said Cannon, an East Brewton resident.
Sixty band members are signed up and have been in rehearsals since the beginning of June; 50 plan to play in Saturday’s concert.
McNally said be believes the music will appeal to all ages, with Disney tunes mixed with traditional marches. With the July 4 holiday approaching, the band will close its Saturday concert with patriotic tunes.
Admission to the concert is free, but donations will be accepted at the door.
McNally said he hopes the band will continue to grow.
“Once we become more well known, we want to do more events,” he said.
McNally said he hopes the band will be able to perform throughout the county. Plans are already in the works for another Atmore concert after the Christmas parade in December.
Band member David Gehman of Atmore said he hopes concert goers will get as much from the band as members.
“We have some really good people who are committed to doing this,” he said. “This is a good quality of life thing and we need that more than ever with everything going on in this world. We need some good, positive things for our communities and this certainly does that.”