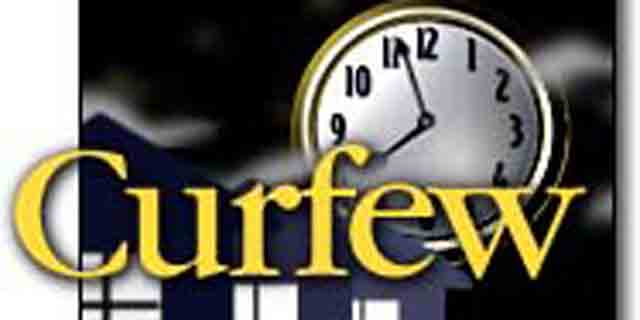 East Brewton teens may find themselves — and their parents — in trouble soon if strolling the city streets after hours is part of their routine.

In an effort to curtail the possibility of teen crime, East Brewton Police Chief Kenny Brazile said his department is hoping to impose a curfew in the next month.

“We have kids walking the streets at all hours and we hope a curfew will put an end to that,” Brazile said. “The last few burglary and vandalism cases I’ve worked have involved school aged children. A curfew would allow us to make sure these kids are off the street.”

Mayor Terry Clark said the curfew is a good step in taking care of some issues in the city.

“I’ve seen kids roaming the street during the day when they should be at school,” Clark said. “I’ve also seen them walking the streets at 11 or 12 at night and even 1 or 2 in the morning. These kids we’ve seen out at those hours have not business being on the streets at that time of night.”

Although the curfew ordinance has some hurdles to clear, Clark said it will be passed.

“We’ve been looking at this for about six months and this is a step we need to take,” Clark said. “We will adopt a curfew. I just want everyone to know it’s coming.”

Brazile said he has drafted a set of curfew rules and regulations and hopes to get the green light from attorneys next week.

“We looked at curfew models from Mobile and drafted a set of rules for East Brewton based on some of their ideas,” Brazile said. “Once our attorney looks it over and tells us we’re on the right track, the curfew documents will be presented to the city council for their approval.”

Although details of the curfew ordinance are not finalized, Brazile said some points have already been decided.

“We will, of course, have a warning period to let the kids and their parents know that the city has a curfew in place once the ordinance is passed,” Brazile said. “After that, we will be issuing citations and assessing fines on those who don’t abide by the curfew law.”

Suggested fines of $50 to $100 for the first offense are being considered. Violators will also be required to pay court costs associated with the case, Brazile said.

“When you put the fines and court costs together, violating that curfew could be pretty costly,” Brazile said. “We will be putting that punishment and fine on the caregivers of the violating juveniles. The adults are responsible for the kids and they will be held accountable.”

Brazile said hours for the curfew are still being decided, but he said there would be some give and take.

“We know that we will have a daytime curfew to help keep kids off the street and in school during school hours,” Brazile said. “We also want to keep them off the street at night, but we will make some provisions for special events like football games, prom and that sort of thing.”

Brazile said he hopes for approval that will allow for a midnight curfew imposed on teens younger than 18.