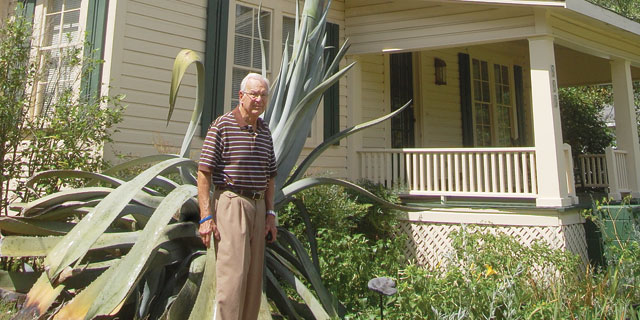 Scott stands at the base of the Century plant in the front yard of his Alco home.

The Rev. Frank Scott knew he had a unique plant growing in his front yard on Alco Drive, but he had no idea it would become a tourist attraction.
The century plant — a wide, gangly green plant with leaves that almost look like tentacles — came with the Scotts when they moved to Brewton nearly two decades ago.
“My wife, Ann, and I dug it up, along with a bunch of other things, and brought it with us when I retired and we moved back to Brewton 18 years ago,” Scott said. “Ann wanted to bring all her flowers with us from Bay Minette and there were a lot of them.”
As Scott learned more about the plant’s traits, he started keeping a close eye on it.
Just this spring, the transformation began.
“We planted the century plant right in front of the house, and during the last 18 years it has grown into a pretty good size plant, looking like a cactus. One day it put out a shoot that began to grow straight up, and it just got bigger and bigger. I sit outside in the yard a lot and I noticed it growing higher than the house. I then tried to measure it by a tall pine across the street. It must have grown some 30 or 35 feet.”
Scott was surprised when the shoot continued to grow. It became like the beanstalk in “Jack and the Beanstalk” and just kept growing straight up from the original plant.
“People started looking toward the house when they drove by and there were several who stopped in front of the house to get a better look,” Scott said.
After the plant had grown higher than the roof, it resembled a giant stalk of asparagus. But then one day it starting to put out some branches from the top of the stalk, which looked much as if it was blooming. By this time Scott had been trying to get some information about the giant growing in his yard.
“I called on Joe Gordy to see if he knew anything about my plant and he told me what he knew,” Scott said. “Although it is a century plant, it really doesn’t bloom that often or even live that long. Joe said it usually takes about 25 years for the blooms to come on the plant, but putting out that giant stalk takes all the nutrients from the parent plant and it dies down. There are then baby plants where the original was growing and they can be divided and replanted.”
Scott said he has already gotten some of the babies out of the ground, but it is a hard job. The parent plant leaves have razor-like edges and the end of the leaves have sharp needles on the tips.
After watching his century plant grow so tall, Scott is now keeping an eye on the blooms that have come out at the top of the stalk. They are in clusters and are bright yellow. They are really quite beautiful, but are difficult to see because they are so high off the ground. Scott has an answer for that problem. He has his own small “spy glass” that he uses to look at the blooms.
“I have been having a lot of drive-by cars where people will show down or even stop to get a look at it,” Scott said. “It has been the talk of the neighborhood and getting a lot of attention. (First United Methodist Church pastor) Ed Glaize mentioned the plant in church last week and when I got home, people were coming to see the plant. I counted 17 people in my yard on Sunday afternoon.”