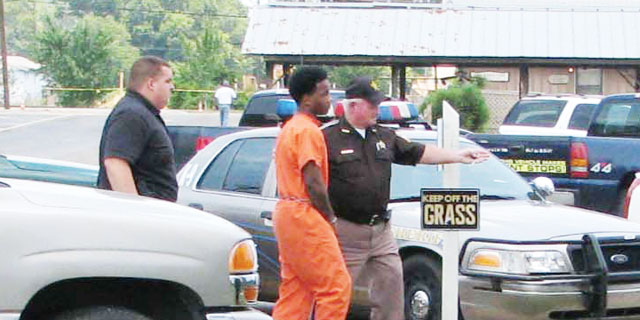 Dailey is escorted into the Escambia County Courthouse Friday for bond hearing.

A “random act of robbery” led to the shooting death of Atmore businessman Kendrick Lamon Dortch Tuesday morning, police said, and two Atmore men — including a teenager — are charged in the incident.
De’Anthony Dailey, 16, was ordered held Friday on no bond. He is charged as an adult with capital murder, first-degree robbery and two counts of burglary of a vehicle in relation to an earlier case.
Damien Jones, 21, was charged with first-degree robbery in the case and two counts of burglary of a vehicle, also in relation to an earlier case. He was ordered held on $300,000 total bond on all of the charges.
Dortch, 38, of Atmore, was found lying on the ground in the parking lot of his business, KDL Enterprises, at the intersection of North Second Avenue and Ridgley Street Tuesday morning dead from a single gunshot to the back.
Atmore police said evidence recovered by investigators led to the arrest of Dailey and Jones, with more arrests “possibly forthcoming.”
At a hearing Friday afternoon, District Attorney Steve Billy recommended bonds for Dailey’s lesser charges, but District Judge Dave Jordan declined to order any bond.
“My inclination is to deny bond on all cases,” Jordan said. “Even if I set bond in other cases you wouldn’t be able to get out because of no bond on capital murder charge.”
Jordan also told Dailey he had the right to request youthful offender status since he is under 21.
“If you are granted youthful offender status, all records in the case would be treated as confidential.”