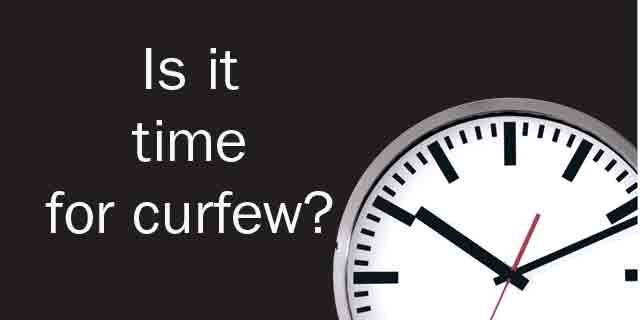 While East Brewton officials ponder the implementation of a curfew for teens — a curfew that could take money out of their parents’ pockets if it is violated — area residents and juvenile court officials have voiced support for the idea.
Greg Smith, co-owner of Pace Coins in East Brewton, said he believes a curfew is in order for many reasons.
“It’s a different time today than it was 20 years ago,” Smith said. “You just can’t tell what everybody else has on their minds, and being out on the streets at all hours just isn’t safe for anyone.”
East Brewton Police Chief Kenny Brazile said several burglary and vandalism crimes in the city have led back to suspects under the age of 18.
“We just want to do what we can to keep that kind of crime under control,” Brazile said. “If this is something we can do to help out the residents and business owners in our community, then that’s what we’ll do. We want to place the responsibility on the parent where it belongs. We don’t want to clog up the juvenile courts with cases for missing curfew. The fines will be placed on the parents, and the case will be handled through municipal court.”
Tentative plans for the curfew would impose fines on parents of teens who are seen loitering or wandering through the community during school or late night/early morning hours. Brazile said the plan would also include a fine schedule that would increase with each offense of breaking curfew.
Parents of violators would also be required to pay court costs for any procedure handled through the municipal court system.
An informal poll at www.brewtonstandard.com saw 79 percent of voters — 91 — in favor of a curfew in East Brewton.
Escambia County Juvenile Probation Officer John Robert Fountain said the curfew as suggested by East Brewton officials would be a step in the right direction.
“I think this can be an awesome thing,” Fountain said. “I think by holding parents accountable, you’ll see more of an influence in changing some of this late night behavior.”
Fountain said juvenile criminal activity in East Brewton, Brewton and Atmore is similar.
“We see the same dynamics in cases all across the county,” Fountain said. “If this curfew works in East Brewton, it would be a good idea for other cities to look at it and mold it to fit their needs.”
Fountain said citing teens and fining parents is a smart move, in part because the county only has one juvenile bed for young offenders. Sending violators of a teen curfew through the juvenile court system could be too taxing, he said.
“If these cases are pursued through the municipality, it can be a good thing,” Fountain said. “Ultimately, what you can do is fine or cite the juvenile and then fine the parents. The parents would have to pay the bill and if they let them stay out again, it could be worked into a misdemeanor crime.”
While the details are not in place, Brazile said the plan for East Brewton’s curfew is being drafted based on some of Mobile’s curfew law.
Mobile’s nighttime curfew went into effect Nov. 1, 2011, and the daytime curfew — only during school hours — went into effect Jan. 3.
W.S. Neal High School Principal Patty Frazier said an East Brewton teen curfew could be beneficial for the entire community, especially with plans to include a school-hour curfew.
“I certainly support anything that would keep our students in school,” Frazier said. “As far as a night curfew, I don’t think there’s anything that goes on in East Brewton after 11 p.m. on a school night that would require a teenager be present. I do support the idea to keep our children safe and in school.”
The proposed curfew for East Brewton has not been presented to the members of the city council for approval.
That presentation will be made once attorneys for the city have reviewed the ordinance and made any modifications necessary.
The ordinance will require the approval of the East Brewton City Council before police officers can enforce a curfew.