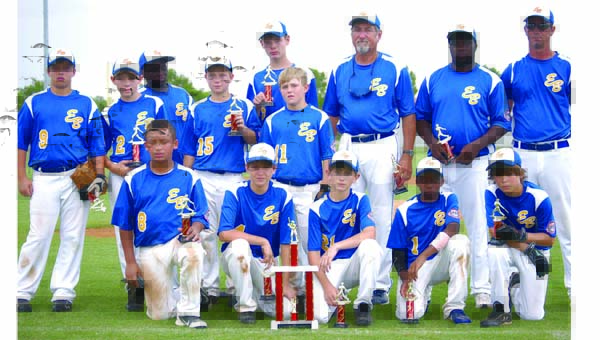 courtesy of the Demopolis Times

One run. One inning. One win away from winning a state championship and being No. 1. That is what the East Brewton 12U all-stars faced at the state tournament Tuesday as they fell one game short of a state championship as they lost to Demopolis 2-1.
East Brewton went 2-2 in pool play to advance to the semifinals of the state tournament Tuesday morning. But after defeating No. 2 seed Sweet Water 9-6 in the semifinals, East Brewton let a 1-0 lead slip away in the fifth inning to finish as the state runner-up.
“I am disappointed for the kids,” East Brewton manager Danny Parker said. “Except for one inning, the first inning in our first game against Demopolis, the kids played super. We had great hitting and great pitching. They did all you could ask of them to do. They have nothing to be ashamed about. They represented the city and the community very well. I am extremely proud of them. The officials there told us that if a slot can open for the regional tournament, we would be the first one they called to go because we deserved it.”
Parker said he would like to say thank you to everyone that helped the team out to be able to go to the state tournament.
“The city of East Brewton and all those others,” Parker said. “They helped make it possible for us to go to the tournament and we greatly appreciated everyone’s help and everything everyone did. It was a good experience.”
East Brewton began tournament play with an 11-1 win over Linden to start the tournament 1-0. In their second game, East Brewton dropped a 10-3 loss to Demopolis but rebounded with a 4-0 win over Butler in their third game to improve to 2-1 in the tournament. In their final pool play game, East Brewton lost to Sweet Water 3-1 to finish 2-2. In the single elimination tournament, East Brewton met Sweet Water again and won 9-6 before falling in the championship game by one.
See Saturday’s Brewton Standard for a complete recap of games.