Local firefighters honor their own 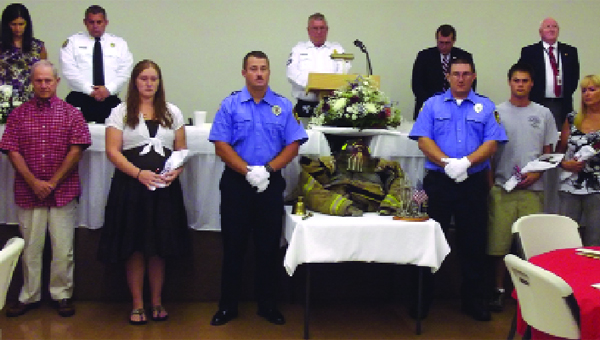 Among the recipients of awards at the annual Firefighters Appreciation Banquet Thursday night was a gentleman whose career began when he was just 14.

Nathan Berry, who died last month in a motorcycle wreck, was named EMS Person of the Year for his service.

Only 22 when he died, Berry had already been a veteran of the Friendship Volunteer Fire Department for eight years. He became a junior firefighter in 2004, after he and his mother saw the fire chief’s house on fire and the young boy ran all the way back to his house to call 911 and help save the home.

“Nathan’s interest in the fire service was fixed that day forever,” a nomination for Berry states. “Nathan was home schooled by his mother, so his afternoons were often spent at the fire station. When fires were reported, Nathan always reached the station first and ensured the doors were opened and the fire trucks were cranked.”

Also Thursday, the Career Firefighter of the Year Award was given to Daniel Love with the Atmore Fire Deparment for his dedication and courage.

The EMS Person of the Year award was given to the late Nathan Berry who served with the Friendship Volunteer Fire Department. His service began when he was only 14 years old and he continued until his untimely death in an accident. His wife accepted the award.

Cindy Jackson was named Female Firefighter of the Year. She works with the McCall Volunteer Fire Department. She has served in the department for more than 25 years. She has served in every office in her department. After her retirement from the Escambia County Board of Education in 2011, she became a full-time worker at the department. This grandmother of five has not slowed down, but only reached out for more since her retirement.

Christopher Burch, of Appleton Volunteer Fire Department was named as Male Firefighter of the Year. Although he has a job that takes him away from home sometimes weeks at the time, when he is home, he works very hard with the fire department completing as many courses as he can. According to his nomination, he is also very good at fundraisers for the department.

Some new awards given this year were the Instate Volunteer Emergency Service Training Coin presentation. Several members of the county fire departments received these coins, which range from Basic to Intermediate, Advanced and Master. Those receiving the awards received the Basic Coin. Each level builds on the previous level.

The county lost four firefighters during the year and they were given special recognition at the banquet. William DeRidder from Dixonville Volunteer Fire Department, Paul Shelly from Dixonville VFD, Nathan Berry from Friendship VFD and Robert Reed from McCall VFD.

After the award ceremony, Michael Tyler, president of the firefighters organization, gave closing remarks on the status of the various departments.

“This has been a great year,” Tyler said. “This association has seen more training in the volunteer side than in recent memory. I hope this is contagious and continues in the future.”

Those plans include an EMT class, an instructor class, a firefighter II class and several in things in the planning stage.

“The communications grant is proceeding and should be completed as early as January of next year,” Tyler said. “There has been a lot accomplished and I look forward to continuing moving into the future with this association.”

Tim Blakemore, retired fire chief from Gulf Shores, was a guest speaker for the banquet along with Allan Rice, executive director of the Alabama Fire College.

Rice spoke of the turmoil of last year’s devastating tornadoes in Tuscaloosa and elsewhere in Alabama. He emphasized the fact that many of those who serve in positions with various fire departments also became victims during the dozens of tornados that roared through that part of the state.

“Things like that don’t happen to us, they happen to somebody else,” he said. “But on that day, things did happen to us and proved that we are just as vulnerable as anyone else. Due to the training our fire departments had, many lives were saved during that terrible time.”