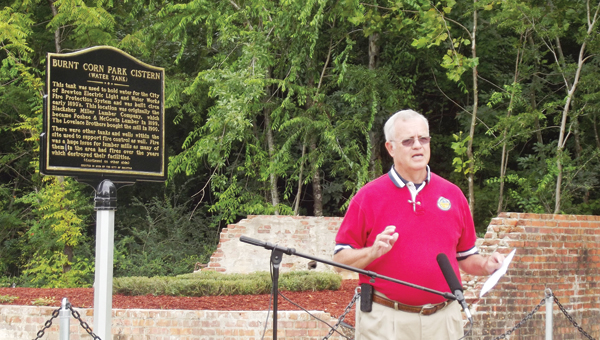 History buffs and local officials were in Burnt Corn Creek Park early on Thursday to dedicate and mark the site of Brewton’s earliest water system.

The original cistern and its surrounding area had been covered with trees and brush for many years before the restoration.

Mayor Ted Jennings said he was glad to see the site recognized.

“People need to remember their history,” he said.

The marker includes the history of the cistern.

“This tank was used to hold water for the City of Brewton Electric Light and Water Works Fire Protection System and was built circa early 1890s,” said Steve Yuhasz, community development director, reading from the historical marker at the site. “This location was originally the Blacksher Miller Lumber Company, which became Foshee and McGowin Lumber in 1899. The Lovelace Brothers bought the mill in 1900.

“There were other tanks and wells within the site used to support fire control as well. Fire was a huge issue for lumber mills as many of them in the area had fires over the years which destroyed their facilities.

“There were at least three wells dug and were used to constantly feed the water level in this tank. One well is just down the embankment from the back wall of the tank structure and it still flows today out of a vertical cast iron pipe.

There would have been a hose reel house close by the tank. Notice the old brick foundation across the walk path from this location. The Sanborn Map of 1898 shows a small hose reel house, possibly housing a pump as well. The tank is shown at this particular location with three springs feeding it.”