Despite going winless, girls have a ‘trip of a lifetime’ 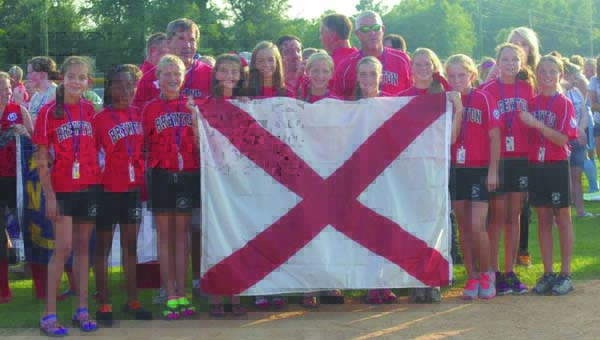 The Brewton 12U girls softball team saw a rough road in their recent regional tournament experience in North Carolina Wednesday and Thursday.
Brewton went 0-4 in tournament play as they were outscored 37-8 in their four games.
Brewton started the tournament Wednesday with a tough loss in the bottom of the final inning as Davidson of North Carolina edged Brewton 8-7.
In game two Wednesday, Brewton was shutout by Down East of North Carolina 6-0.
After going 0-2 in their first day of the tournament, Brewton was shutout again Thursday morning in their first game as Washington of North Carolina handed Brewton a 12-0 defeat.
In their fourth and final game Thursday afternoon, Brewton lost to Albemarle of Virginia 11-1 to end their all-star season as Brewton failed to qualify as one of the top six teams to advance on to the double elimination part of the tournament that began Friday.
Despite going winless, Brewton head coach Will Ruzic said it was a great tournament for the girls.
“They played competitively throughout the entire bracket,” Ruzic said. “Exposure like this will help these girls to continue to grow and mature as a team as our softball program continues to get bigger and better. They represented our community with great class and great sportsmanship. It has been the trip of a lifetime for them and they have created memories they will carry with them forever.”
Brewton was the only team from Alabama at the regional tournament in North Carolina. Other teams included five from North Carolina—Davidson, Washington, Down East, Pitt County (host team) and Kinston/Lenoir; three from Virginia—Albemarle, Rockville and Warren County; and one from Florida—Winter Park.
All-stars for the 2012 12U Brewton Babe Ruth girls softball team were: Anna Kate Brittain, Mary Madison Brown, Madison Douglas, Mallori Floyd, Hannah Lisenby, Morgan Longmire, Bethany McDonald, Myra Reiss, Grace Ruzic, Steely Ruzic, Caitlyn Smith, Anna Grace White.
Coaches were Terry Reiss, Will Ruzic, Greg White and Robbie Floyd.
Brewton went 4-0 in the state tournament in Brewton. Brewton earned wins over Andalusia (26-1), Covington County (10-5), East Brewton/Flomaton (8-2) and a 14-1 over Covington County in the championship game.

Wednesday game one: Davidson County 8, Brewton 7
In their first game of the southeast regionals Wednesday morning in North Carolina, the Brewton 12U softball girls got off to a 0-1 start as they fell late to Davidson County of North Carolina 8-7.
Brewton trailed 1-0 after the first inning before taking a 2-1 lead in the second inning.
After being held scoreless in the top of the third inning, Davidson County took a 5-2 lead over Brewton heading to the fourth inning. In the fourth, Brewton rallied with five runs of their own to grab a 7-5 lead.
Brewton would hold the two-run lead until the bottom of the fifth when North Carolina scored one to cut the lead to 7-6.
In the sixth, Brewton was held scoreless and took a one-run lead into the final inning, but North Carolina scored two on a walk off double to stun Brewton and take the win by one, 8-7.
Steely Ruzic was the losing pitcher for Brewton as she went six innings and allowed nine hits, walked two and struck out three.
Grace Ruzic had three-run double in the fourth inning for Brewton to tie the game at 5-5. Myra Reiss scored two runs and Madison Douglas scored one. Mary Madison Brown scored two and Caitlyn Smith and Anna Kate Brittain both scored one run each.

Wednesday game two: Down East 6, Brewton 0
In game two Wednesday, Brewton lost to Down East of North Carolina 6-0.
Down East scored two runs each in the first and third innings and one each in the fifth and sixth innings and held Brewton scoreless to get the win and drop Brewton to 0-2 in tournament play.
On the mound for Brewton, Steely Ruzic went one inning and allowed four hits and two runs. Reiss pitched the final five innings and allowed eight hits, four runs, walked two and struck out one.
Brewton had no hits in the loss.

Thursday game one: Washington 12, Brewton 0
Brewton took their second straight shutout loss in their first game Thursday as Washington of North Carolina defeated Brewton 12-0 in four innings.
Washington jumped out to an early lead on Brewton and never looked back as they scored five runs in the first and second innings and added two more in the third while holding Brewton scoreless to get the win by 12.
At the plate for Brewton, Steely Ruzic and Floyd had one hit each.
On the mound, Reiss was the pitcher of record for the Brewton all-stars in the loss.

Thursday game two: Albemarle 11, Brewton 1
In their final game of the tournament, Brewton was able to score one run but took a 10-run loss to Virginia’s Albemarle, 11-1.
Virginia used a five-run first inning to get on Brewton early and added two runs in the second and three in the third to build a 10-0 lead heading into the fourth inning.
Brewton’s lone run came in the top of the fourth as they cut the lead to 10-1, but Virginia would add one late run to get the win by 10.
Anna Kate Brittain, Anna Grace White, Hannah Lisenby, and Caitlyn Smith all had one hit each for Brewton. Floyd scored the lone Brewton run.
White took the loss on the mound.