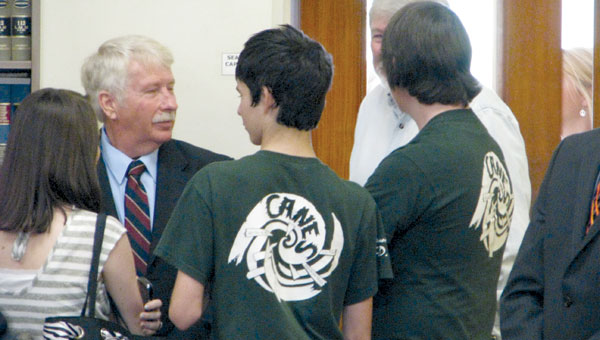 A loaded gun left in a bag inside his locked classroom led to the firing of a longtime band director Monday.
John Lambert was fired from his position at Flomaton High School after a three-hour hearing which included testimony on the evidence and character witnesses on Lambert’s behalf.
The board, voting 5-1, followed Superintendent Randall Little’s recommendation to fire Lambert.
Lambert, who has also served as band director at other Escambia County Schools during his more than 30-year career, stood accused of bringing a firearm onto school property — a violation of Escambia County Personnel Policy 826, board officials said.
“Mr. Lambert admitted to an inadvertent violation of policy and agreed to a 30-day suspension without pay in order to resolve this matter,” Lambert’s attorney Charles Johns said in a statement Tuesday. “However, the board was not flexible nor was it willing to discuss any sanction other than termination.”
Johns said he would review the case with his client but he expects Lambert to appeal the decision.
“I would anticipate that we will appeal the unfortunate and misguided decision, which we believe ignored both state and constitutional law,” Johns said. “Additionally, we also believe the policy itself was legally flawed in its construction. The children of the county were not served by this decision. Rather than preparing for the upcoming marching season, Mr. Lambert will be preparing for his appeal.”
At the start of Monday’s hearing, School Board Attorney Broox Garrett said the entire situation was unfortunate and was forcing a decision by the board.
“This is an unfortunate case,” Garrett said. “The board has policies and rules in place to ensure the safety of school personnel and students when they are in school. He violated school policy and violators have to suffer.”
Johns said Tuesday the policy is not a “zero tolerance” policy, such as the one for students which explicitly forbids guns on campus and requires expulsion for one year.
Several witnesses at the hearing were asked to explain the circumstances surrounding the discovery of the weapon last May.
Flomaton High School Principal Scott Hammond offered testimony surrounding that discovery by school custodian, Rita Folmar.
“A little past noon, I was teaching my algebra 2 class and Ms. Folmar came to me and said she’d found a gun in the band room,” Hammond testified.
Hammond said he and another teacher went to the band room with Folmar and went to Lambert’s office, where Hammond said a bag was found on his desk and it contained a small zippered pouch that held in the gun and two loaded clips, one of which was in the gun.
“I looked in the bag to see who it belonged to and found a checkbook with Mr. Lambert’s name on it,” Hammond said. “I took the gun and put it in my pocket and walked back to my office where I called Mr. Little.”
Hammond said he then took the gun to the central office in Brewton and gave it to Little.
Hammond said Lambert later told him that the band director believed some money was taken from his bag as well.
Folmar, in fact, has also been suspended, and Flomaton Police Chief Daniel Lambert said his department conducted an investigation into allegations of theft.
“We will present that information to the grand jury this week,” he said.
School board members agreed  to continue Folmar’s hearing regarding her employment until after the grand jury meets.
Several witnesses were called to the stand to defend Lambert in the case. During the testimony witnesses recounted good deeds and excellent performance on his job as band director during the period leading up to the discovery of the weapon. Each of the witnesses expressed a desire to see Lambert retain his position.
Witnesses included fellow educators, former band students and members of the Escambia County Community Band, for which Lambert serves as member and director.
“He has always done a good job. I’ve never heard or seen anything out of the ordinary or undesirable,” said Debbie Thomas, a teacher at FHS and band booster president.
After hearing all testimony in the case, Johns renewed motions he introduced to dismiss the case against Lambert.
Board members denied the request to dismiss and adjourned into executive session.
Upon returning to the open meeting, board members were polled on their decision to follow Little’s recommendation to terminate Lambert. Board members Michael Goolsby, Jack Crutchfield, Danny Benjamin, Sherry Digmon, Chuck Brooks and William Grissett all voted to follow the recommendation for termination, with Cindy Jackson casting the only vote in favor of Lambert remaining in his position.
On Tuesday, board president Grissett said he would have been agreeable to a suspension — but recent events reminded board members what could have happened if a student found the weapon.
“I certainly would have been agreeable that we suspend him for 30 days without pay and then granted him the ability to come back,” Grissett said. “I would have been amenable to do that, and it was discussed. But then the issue came up about Columbine and Colorado recently and their hearts got so wrapped up in that and then they presented the projection that suppose this lady had been a student and gone in there and got the gun. We could have had a massacre there. So there were so many technicalities that came into focus that the board simply felt that we just need to go ahead and terminate him.
“It’s not because of his character. It’s not because of the job he has done, because he has done an excellent job. He’s been with us for some 30-plus years. But the fact is still there that he had a weapon, and that’s the thing that the board finally made the decision on.”