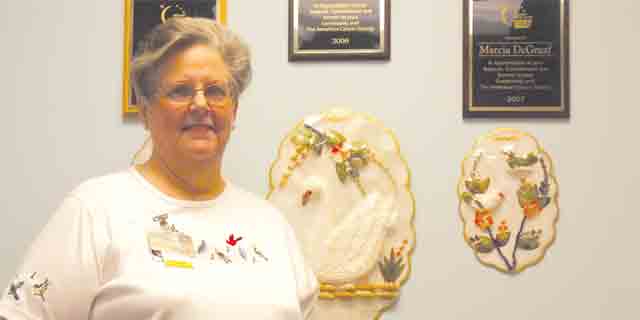 Marsha DeGraaf has a deep faith in God — and in the people she works with at D.W. McMillan Memorial Hospital.
“I have been here for the past 13 years and I love working with my family at the hospital,” she said. “I left my own family long ago in Michigan to come to Brewton, but I found co-workers and friends can make the best family to have.”
She is the director of human resources and community coordinator at the hospital where she works with payroll benefits and various community support groups in health care events in the area.
“We have quite a payroll for the hospital and the different entities owned by the hospital,” DeGraaf said. “I work with that and the different benefits associated with those employed by the hospital.”
DeGraaf was born and raised in Grand Rapids, Mich., and graduated from Hope College in Holland, Mich.
“I knew that I wanted to teach and be involved with music,” she said. “Right out of college, I left for a European tour with the choir from college. As soon as I returned, I took a job in Brewton teaching at Southern Normal. It was a time of racial problems, and my father was not happy to know that his little girl I was going into the deep South to teach in what had been primarily a segregated area. But he knew me, and knew that my mind was made up.”
At that time, Southern Normal was a mission church and part of the Reformed Church, which was a great supporter of the school.
When DeGraaf left Southern Normal, instead of returning to Michigan, she got a job working in the Brewton City School System teaching music.
“I always wanted to be a music teacher,” DeGraaf said. “I was in the city system for only about two years before the music program was dropped from the curriculum.”
DeGraaf got a job at the hospital working in the insurance office for a few years. “Devon Wiggins, who was the probate judge at the time, asked me to come work in the courthouse with him where I stayed for the next five years,” she said. “After that I got a job working at Container Corporation doing property taxes and working with the legal department on property ownership.”
But when the company merged with Smurfit-Stone in 1998, DeGraaf lost her job.
“I have had lots of jobs in my career,” she said. “I believe that each one of them has been learning lessons to prepare me for the next job. When I was able to go back to the hospital, I felt like I was home. My very first job was in a hospital. I have been here now for the past 13 years. It’s a privilege to be able to work with the employees and community. We are just a big family. We all have issues but we help each other. I have no blood kin here in Brewton, but I have lots of friends who are my family.”
In her spare time, DeGraaf is still involved with her music. Instead of teaching, she, and her friend, Sharon White, focus on concerts they have been able to perform. White plays the organ, while DeGraaf plays the piano and they do several concerts a year, some for Covenant Hospice, for which DeGraaf serves on the board. DeGraaf said she is very proud of being a part of  Covenant Hospice.
“I believe that you have to give of yourself and the more you do, the more you receive,” she said. “I have loved Brewton and tried always to be involved with the community. That is one thing that I love about living in a small town.”
DeGraaf is a member of First Presbyterian Church of Brewton, where she teaches a ladies Bible class. She is active in the music program there, but she doesn’t limit her musical talents to the Presbyterian church.  Almost every local church has, at one time or another, been blessed to have her share her music.
DeGraaf said she spends a quiet life, or as quite as anyone can who does as much as she does. Her idea of having fun is to go home at the end of the day and be with her chocolate cocker spaniel.
“I have been asked why I practice as much as I do,” she said. “But I always say that you have to stay tuned, and when you play for the Lord, you need to do the best that you can. I have learned to know my limits. It makes me enjoy life better.”
DeGraaf and her devotion to her job has not gone unnoticed. Along with many other awards and accolades, she was named as Health Care Hero in 2011 for the hospital and was named Woman of the Year in 1981 by the Chamber of Commerce. She has been very active in the American Cancer Society Relay for Life. The hospital maintains a loan closet for cancer patients, and the Survivor Dinner for Relay for Life is held at the hospital each year.