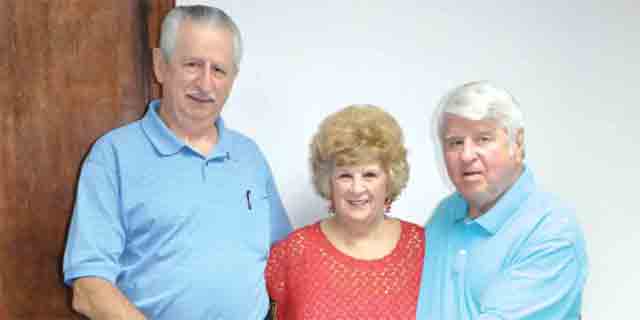 Rogers, left, is shown with his wife Fay, and Bank of Brewton President Jerry Kelly.

Tom Rodgers had a chance to trade his computer for a fishing pole Friday when he retired from the Bank of Brewton after working there for the past 30 years.
“I’ll miss my fellow coworkers and the people I have been around for the last 30 years,” Rodgers said. “But, I am looking forward to doing some fishing. My wife, Faye, and I have a camper and plan to do some camping.”
Rodgers was born and raised in Brewton, and attended T.R. Miller High School. After high school, he attended Samford University, before joining the U.S. Army in OCS school. He later taught school for a year and went into sales for a while, but 30 years ago he went to work at Bank of Brewton in the loan department.
In 1985, Rodgers was given the job of working with the bank’s computer.
“In those days, the computer was about the size of two tall filing cabinets,” he said. “It was slow too. It took about four and one half hours to update. Today it takes about 15 minutes. Most of what I know about computers was learned on the job. It was all new back then, but today everybody is more dependent of computers than ever. I heard somewhere that without computers doing the work their job would use up to 60 percent of the work force. Today, those who work with computers are more specialized than they used to be, and sometimes it takes a specialist to work on them.
“When I started to work with the bank’s computers, we only had one and today there are several,” he added. “There are also regulations that have to be put into order to bring about compliance. One funny story was that one night at about 3 a.m. I was working on a problem and called for some help. The answer I received was that my information on the problem was being put on a message board. I thought that it would be put in with a lot of other messages and be overlooked. I got a call from someone who helped take care of the problem. I told him that I was sorry he had to get out in the middle of the night and he replied that it wasn’t the middle of the night where he was. I asked him where he was and got the answer that he was in New Zealand and it was about 2:30 p.m. where he was and it was daylight.”
Rodgers and his wife are looking forward to having some free time, and in addition to fishing, will be seeing more of their four children and three grandchildren.
“I am looking forward to my retirement, but I will miss all my co-workers at the bank along with  the customers that I have known over the years.”