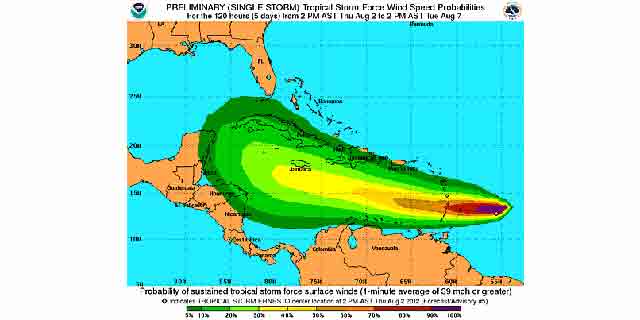 Officials with the National hurricane Center said Thursday the Tropical Depression 5 had gained enough power to be upgraded to a tropical storm making it the fifth named storm of the season.

Tropical Storm Ernesto was continuing to move at a rapid pace Thursday after forecasters studied models and issued tropical storm warnings for the Lesser Antilles. Tropical storm alerts were upgraded from watches to warnings for areas including Barbados, St. Vincent, the Grenadines, Dominica, Lucia, Martinique and Guadeloupe.

Afternoon alerts from NHC on Thursday plotted the storm as moving 2o mph in a westerly direction with strong winds already building around the storm.

Forecasters say storm should be somewhere near the central part of the eastern Caribbean sea islands by Friday based on current speed and predictions.

A graphic indicating the arrival of tropical force winds was also released on Thursday showing a detailed area of coverage for wind speed. Portions of south Florida may feel the winds of the storm by Tuesday, according to released information.