One dead in Jay Road crash 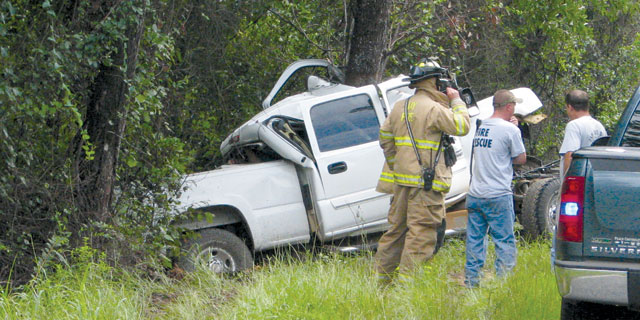 Kenneth Ray Thomas was killed when his truck, above, slammed into a tree Friday afternoon on Jay Road.

A Brewton man was pronounced dead at the scene of a crash on Jay Road Friday afternoon.
Kenneth Ray Thomas, 61, of 5716 Jay Road, was the only occupant in the four-door truck involved in the crash, according to officials with the Escambia County Sheriff’s Department. The truck slammed into a tree, sending debris across the road and into a ditch.
Jay Road was closed for more than two hours Friday afternoon as emergency responders worked to free Thomas from the vehicle.
Witnesses at the scene said the sound of the crash could be heard nearly a half mile away. Members of the Dixonville Volunteer Fire Department responded to the scene as well as members of the Escambia County Rescue Squad and Jay Fire Department.
Family members were notified of the death shortly after officials learned the identity of the victim.
The crash remains under investigation by the Alabama Department of Public Safety with Trooper Law working the case.