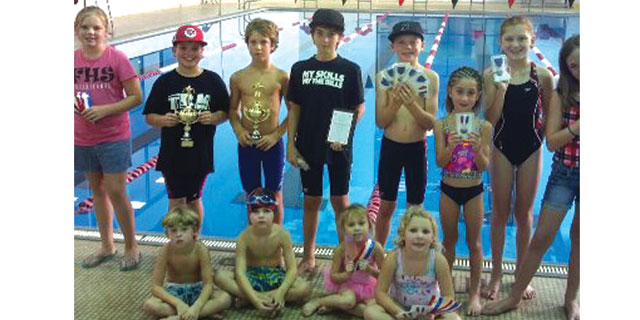 The Brewton Local Area Swim Team (B.L.A.S.T) recently competed in the Gulf Coast Area Aquatic League (G.C.A.A.L.) Summer Championship Meet, hosted by Gulf Shores Swim Team and placed third overall.
Swim team coach Angel Boyd said the Tigersharks rocked the blocks and walked away with lots of hardware this past weekend.
Cole Jernigan, son of Lee and Felicia Jernigan, swept the 10-year-old male division. Jernigan won all five individual races he competed in and anchored the 10U relay team that also took the first place medal in the meet.
Jernigan also swam in fly and the medley relay that won the silver medal. The relay team came within 7/10 of a second behind the first place team.
“Jernigan won seven medals and brought home the High Point Trophy for his outstanding performance,” Boyd said. “Cole also served as captain of the free relay team.”
Mac Baxter, son of Chris and Angel Baxter, also had an outstanding championship meet, according to Boyd.
“Mac swam in all five events in the 9-year-old male division,” she said. “Mac also swam in the 10U winning freestyle relay and the silver as he medaled in the 100-medley relay. Baxter dropped time in every event he swam. He also brought home the High Point Trophy for his performance. Mac also served as captain of the medley relay team.”
Nolan Atkinson, son of Rob and Lisa Atkinson, took first in four of five individual events and second in another.
“Nolan had an amazing meet for us,” Boyd said. “Nolan also won High Point honors in the 8-year-old male division and anchored the boys 10U winning freestyle relay as well as earning a silver medal in the medley relay.”
Eleven-year-old Colby Morris, son of Brandee Chase Morris, also had a great meet, Boyd said.
“Colby medaled in all five of his individual events and placed fourth overall in the high point rankings,” Boyd said. “Caleb Kent, son of Danny and Phyllis Kent, swam great for us. He medaled in all five individual events and was a part of the gold medal 10U freestyle relay team and the silver medaling medley relay team.”
Elizabeth Glass, daughter of Dewayne and Brooke Glass, also medaled in all five of her individual events, Boyd said.
“She served as team captain of both 10U girls relay teams and placed fourth overall in the high point rankings,” Boyd said. “Elizabeth dropped major time in every event she swam.”
Auburn Jernigan, daughter of Scott and Tracy Jernigan, medaled in four of five individual events and ribboned in the fifth event.
“Auburn also dropped time in every single event she swam,” Boyd said. “She did some awesome swimming. Sara Scott, daughter of Doug and Sheila Scott, also had a great meet. Sara won medals in three of five individual events and dropped time in all of them.”
Addie Heath, daughter of Dewayne and Melissa, also had a great meet, Boyd said.
“She won medals and ribbons in each of her individual events,” Boyd said. “Brooklyn Roe, daughter of Ben and Brandi Roe, also had an amazing meet winning every heat she swam and medaling for her efforts, as well as ribboning in all of her individual events. Jocelyn Carpenter, daughter of Brant and Carla Carpenter, also had a great meet, winning ribbons in all of her individual events.”
Other Tiger sharks in attendance were: Kayleigh Kulicka, who won five individual ribbons; Emmie Heath, who ribboned in one individual event; Addison Jernigan ribboned in two individual events; and Joseph Carpenter swam in his first championship meet.
As a team, the Tigersharks finished in third place overall in the League Championship meet.
Boyd said she was very impressed with how well her team competed this past weekend. “The Tigersharks were the smallest team at the meet with 14 less swimmers than the next size team,” she said. “There were seven teams participating in the meet and the Tigersharks took third place.
The Tigersharks are coached by Boyd and Brandee Chase Morris, and is currently taking registration for the fall session.