Teachers get lesson on September election 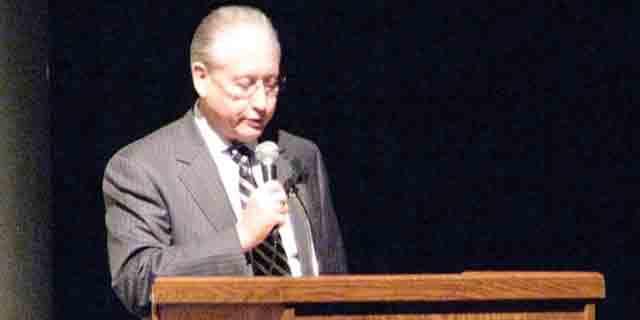 A captive audience of teachers preparing for the first week of school gave Escambia County Schools Superintendent Randall Little a chance to discuss the importance of an upcoming vote on a referendum that would move money around in the Alabama Trust Fund.
The referendum would, over three years, transfer $437 million from a state trust fund to the General Fund.
“We have many important elections this fall, but this one is going to be very important not only for our educational community but also for the future economic development for the state of Alabama,” Little told teachers gathered at Flomaton High School Tuesday. “We need to vote yes on Sept. 18 for the Alabama Trust Fund. If the amendment fails, we could face having to rewrite the 2012-2013 budgets, and the educational budgets could be reduced and the money shifted. If it does not pass we could look at the release of 9,000 to 10,000 inmates and 1,200 correctional employees may lose their jobs. We could also face 17 percent proration. If this happens and it fails, I have to agree with what our Gov. Robert Bentley said in that ‘everything will be out on the table.’ It is that important.”
Little said he thinks everyone should support the amendment, but encouraged teachers to vote how they believe.
“That is just my opinion, and you should have your own,” he said. “If you care about children and the elderly, family or friend that depends on Medicaid, you should vote yes. Anyone who wants to protect critical health services and anyone who wants to prevent the release of Alabama prisoners to be on our streets should vote yes.”
Little said he believes if the amendment fails, the state will see consequences — including the possibility of proration.
“Without this amendment, taxes will have to be raised, even though a lot of our legislators say that is not on the drawing board, but I believe if it fails, it will be,” he said. “Right now there is little support for raising taxes, but if this fails, I would think it would have to be considered. If they don’t look at taxes, they would probably have to look at the Educational Trust Fund. If that happens, we will have another severe round of proration, and I don’t want that and you don’t either.”
Little said he wanted to encourage voting on the referendum because a low voter turnout on that day is predicted.
“I just wanted to emphasis this vote because usually when there is only one thing on the ballot, most people don’t think it is important to go vote, but it is,” he said. “Let’s have a large turnout from the Escambia County School system and our friends.”
Those in attendance also enjoyed hearing guest speaker Dr. John Hodge as well as from others in the system.
“I think Dr. John Hodge was a good speaker who shared his personal experiences and philosophy on education and his optimism,” Little said.
In the close of the meeting, Little talked about the release of the school’s recent scores in state accountability testing.
“I am pleased with our Adequate Yearly Progress (AYP) scores,” he said. “We successfully completed 175 of our 181 goals that we set for ourselves, which comes to 96.68 percent. So basically we are at 97 percent. Eight of our 11 schools passed all of their AYP goals. The key when I started in 1972 was the same key in 1852 and it is the same in 2012 … the classroom teacher. You are the most effective indicator of success — regardless of all the technology we have today, which is a good thing. As a teacher all you need is yourself, an overhead projector and a chalkboard and you can still be successful.”
The first day of school for area students is set for Monday.
“I am definitely looking forward to this 2012-2013 school year, and I know you are as well,” Little said.