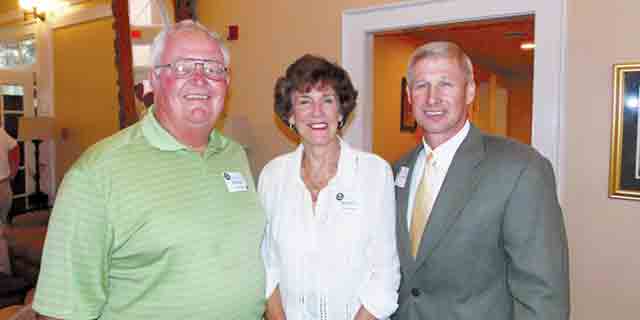 Government officials and area foresters were on hand recently for the annual Alabama Forestry Association’s regional reception honoring the forestry industry.
State Representatives Alan Baker and Mike Jones were joined by Brewton Mayor Ted Jennings at the event held at the Country Club of Brewton hosting several members of the local forestry community.
The southwest Region of the Alabama Forestry Association has hosted similar receptions across the state with foresters from across the United States attending the events.
At the Brewton reception, Tom McMillan III traveled from Charlotte, N.C., to attend the event. Attendees at the Mobile reception held recently came from as far away as California, forestry officials said.
The interest in forestry related issues is on the rise and is evidenced by the increasing attendance at the AFA sponsored events.
Landowners have shown their desire to ensure there land can be harvested, while mills want to comply with SFI standards.
Mae Stimpson, regional coordinator with the Alabama Forestry Association, said the work of foresters throughout the state is helping to keep the economy moving.
“Forestry related industry accounts for 10 percent of the total economic structure in Alabama,” Stimpson said. “Keeping forestry related jobs is a primacy focus of the Alabama Forestry Association. We are thankful for the efforts of foresters as each person helps make these events beneficial to the Alabama forest industry.”