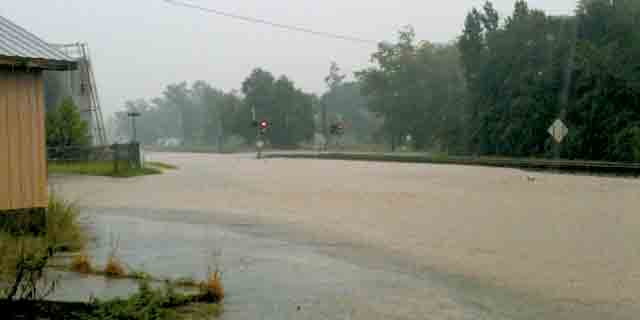 This photo provided by Joe Luttrell shows the flood of waters along Sowell Road near the Douglas Avenue intersection Thursday afternoon.

Five inches of rain in 45 minutes taxed Brewton’s drainage system Thursday afternoon — and left streets flooded across town.
But street and sanitation supervisor Ray Madden said the waters receded quickly, especially on Belleville Avenue, where a new drainage system put in place during a lengthy construction phase last year saw perhaps its greatest test yet.
Meanwhile, teachers already on the job at T.R. Miller High School Thursday had to wade through water to move materials prepped for the first day of school.
At T.R. Miller High School — and all across Brewton — water was several inches deep, causing issues with travel and the threat of water in homes and businesses.
Debra Mullis, administrative assistant at T.R. Miller High School, said the storm brought plenty water to the school and to the classrooms.
“The water was ankle deep on the breezeway near the media center,” Mullis said. “The water was running like a creek through the campus. We began to move things up from the floor because we had no idea if the water would keep rising.”
Mullis said teachers and staff worked together to make sure nothing was damaged by the water making its way across campus.
“We had teachers up and down the halls without their shoes on working to make sure everything stayed dry,” Mullis said. “We had Lynn Smith on campus working on making sure drains were draining, and Doug Gerety was working on things around campus as well. It was a sight to see. But, we all worked together and didn’t have any major damage. We did have some water in the halls and even into some of the classrooms, but we have driers in place taking care of everything.”
Unofficial reports show more than six inches of rain falling on the city in less than an hour causing flash flooding in several areas including the downtown area.
Officials with the Brewton Fire Department say crews responded to eight emergency calls during and following the storm. At least two calls reported trees on fire in the Alco Drive and Sowell Road areas. A transformer was down at T.R. Miller Mill Company with trees down on Memory Lane as a result of the storm, officials said.
Only one vehicle accident was reported during the storm. The wreck on South Boulevard near Bondurant Hardware saw minor injuries, officials said.
Madden said Belleville Avenue was the least affected area.
“The new drainage system we have in place on Belleville really worked well,” Madden said. “Because of the drainage there now, downtown had the least problems of anywhere in the city.”
Madden said several streets experienced flooding — something seen when massive amounts of rain fall in a short time span.
“We measured more than five inches of rain in about a 45-minute time span,” Madden said. “Anytime you have that much rain falling at one time there are going to be problems.”
Madden said the city drainage system was as prepared as possible, but situations like Thursday’s storm would tax any system.
“No drainage system of any size any where could handle that much rain,” Madden said. “No matter how much you prepare, you just can’t be prepared for such a massive amount of rain. We only had one blocked drain in all of that Thursday at Pecan and Briarwood. Our crews got it cleaned out and got the water moving there. Dewayne King worked on that situation and did a great job to get drains cleared to move water out of the area.”
Madden said high waters were seen throughout the city with some particular issues facing residents in areas prone to flooding.
“We saw high water in the Underwood and Douglas Avenue area,” Madden said. “We saw some high water problems on Curlan and Evergreen avenues and down St. Nicholas. Even Escambia and Bonita had some flooding. It was just flooded all over town.”
Madden said although the waters were high following the storm, it took minimal time to get the water moving again.
“Our drainage system did as good a job as possible,” Madden said. “It only took about 45 minutes or so after the storm passed through to see the waters moving and receding well enough to get the streets passable and nearly back to normal.”
Madden said the brunt of the storm caused some storm drains to back up with water flowing out of the drains at one point in the afternoon.
Madden said called Brewton police to assist with some issues after the storm.
“We asked for a little help from the police to block off some streets,” Madden said. “We had an issue at Hawsey and Douglas where the street had actually washed apart where we were doing some work on a water line there. We had to block off that street until we could get some dirt back in the trench.”
Madden said residents in the city can be of help in the event such a situation arises in the future.
“Residents can help us out by calling us if they see something that could cause a drainage area to be blocked,” Madden said. “Clearing away debris in our drains can help us to be better prepared if something this massive happens again. A call from residents can alert us to areas that need attention.”
Madden also said the storm and the flooding is a good reminder for some residents to seek flood insurance.
“For the people who had some bad situations because of this storm, it would probably be a good idea to get some flood insurance,” Madden said. “It might be 10 years before we see something like this again or it could happen four times next week.”
Residents should be on the alert through the beginning of the workweek with a 60 percent chance of rain on Saturday and Sunday and a 50 percent chance of rain Monday.