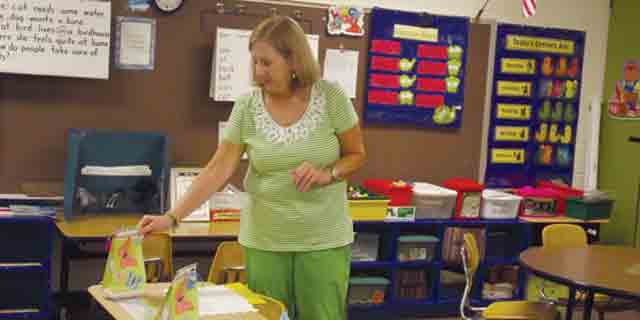 Brenda Taylor prepares her classroom at W.S. Neal Elementary School for students who will return to class Monday.

Faculty and staff were busy through the past week preparing materials and classrooms for the return of student on Monday in Brewton City Schools and Escambia County Schools.
Brenda Taylor, a first grade teacher at W.S. Neal Elementry School, said she is excited for the school year to begin — her 16th in the profession.
“I am excited about the new school year and getting back for another year,” Taylor said. “The kids themselves are ready to come back I think, but it will take a little while to adjust for some of them. Some of them have gotten into the habit of sleeping later, but most of them are ready to get back to school.”
Taylor said she has spent several hours in the classroom preparing for the upcoming year — an activity seen by other teachers throughout the school.
“I have been to the classroom several times over the summer just doing a little along,” Taylor said. “But all of us have worked hard all the past week. I have 14 students right now and we have a new math series  to teach this year. We have enough iPads for each child in the class but not enough for each room them in their class.”

Kathy Madden of Brewton Elementary School, teaches special education and she only has eight students this year, at least as of Friday.
“I have eight students, but there may be more later,” Madden said. “I am looking forward to a new year, and I think the kids will be happy to get to school.”
Shellie Carden, who teaches the fourth grade at Brewton Elemetary School, said she will have 20 students in her class this year.
“I am excited to getting back to school,” Carden said. “I think the students are ready too. They all will be a little nervous, but that will go away after a few days. I am happy to say that even with cuts in the budget, we were able to get five new computers for each room. We use them a lot and this year we are working on Common Core standards, which means that nationally there is a goal to unify education for all schools. This will mean that a student in one state won’t be left behind if he is moved to another location in the United States.”
Not only are the students and teachers excited about the new school year. Lynn Smith, superintendent of the Brewton City School System, said they are all ready to go back to the classrooms.
“We have been awfully busy and excited about a new school year,” Smith said. “I know that I am glad for it to start. The teachers have been coming in to work on their rooms. The number of students is about the same as last year, or it may be a little less.

Where there’s a will…