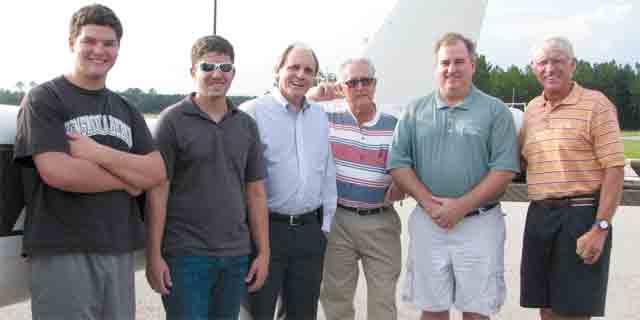 Every little boy dreams of being able to fly. Some want to do it with a cape while others take a more down-to-earth approach.
A few of those grown up boys have seen their dreams take wings after enrolling for flying classes through Jefferson Davis Community college.
Bart Griffith, who serves as the class instructor, has been working for 11 weeks to teach the enrolled students the important steps of becoming a pilot by explaining the fundamentals of flying.
The first class of its kind offered by JDCC enrolled nine students with each one completing the course.
At the end of the course, students were taken to Brewton Municipal airport to get a hands-on feel for the planes that all hope to fly in the future.
As the students considered the next steps in becoming brave enough to fly solo, a few of the students have not been brave enough to tell family and friends of their lessons and what they hope to accomplish.
One student, Escambia County District Attorney Steve Billy, said his wife knew all about his taking the lessons, but he skirted around the question of whether his mother knew what he was doing.
“I have enjoyed the classes and I have learned a lot about flying,” Billy said. “I have always wanted to fly a plane, and who knows, I just might be able to use the knowledge someday.”
Paul Smith said his wife urged him to take the course.
“I have thought about it and my wife, Janice, wanted me to sign up,” Smith said. “Bart has done a great job of instruction. It is exciting to think about taking to the air, but we have had a really great teacher. We have talked about trying to go together to purchase a plane after we get through with all our training. I think I will be finished by next summer.”
Smith did change his the statement of buying a plane, which may come as a relief to the wives of the students who shared in the instruction with him. He said that they would try to get a good used airplane and pay $10 a week until they had it paid for — a plan all the students agreed was perfect.
Dan Weaver said the flying lessons has been  something that he had always wanted to do.
“I always wanted to and this seemed like the perfect time,” Weaver said. “I have really enjoyed the classes and being with others doing the same thing, I can honestly say that this is the first time I ever took a three-hour class and wondered what happened to the time at the end of the class.”
While most of the students have retired or are near retirement, there are a couple of youngsters in the classes.
Zack Kaderly is a young man who actually plans to use what he learns in the classes in his chosen career.
“I plan on a career in aerospace engineering,” Kaderly said. “I thought this was a good way to learn some pointers.”
Griffith said that he is now looking for students for the next series of lessons.
The students who have completed the first class have to decide if they are going to continue to pursue the dream of flying.
Griffith said the students have learned the basics of flying through the course offered for the last several weeks. The next step is to take to the air.
“It takes 30 hours of time in the classroom, 30 hours training on the plane with an instructor, and 10 more hours of solo flight,” Griffith said.
Officials at Jefferson Davis Community College have said the interest in the class has been well received and plans are to continue with the flying course as long as students are interested.
The flying classes recently completed is the first cooperative class offered through JDCC in conjunction with Griffith and the Brewton Municipal Airport.
To learn more about flying classes offered through Jefferson Davis Community College, contact the dean of instruction or the student services department at 867-4832.