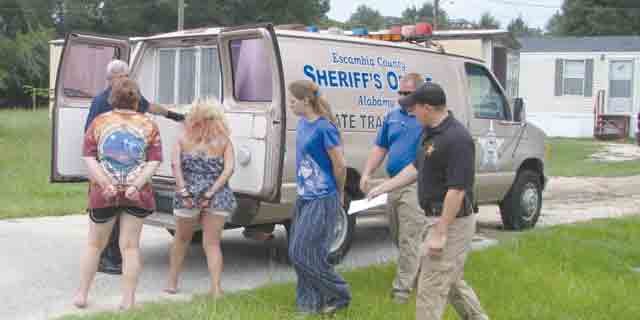 Acting on a tip from the Narcotics Division of the Brewton Police Department, officers with the 21st Judicial Drug Task Force began an investigation into a case Monday that ended with four suspects behind bars on a variety of drug charges — including manufacturing a controlled substance.
Officers with the DTF said they began their investigation when information concerning multiple purchases of Pseudophedrine by a single individual was given to officers.
The tip lead investigators and DTF agents to a mobile home located in lot 1 one of a mobile home park at 3672 U.S. 29 in Brewton.
Once officers arrived at the residence, the suspect named in the tip was seen standing in the yard of the residence. Once at the scene, agents requested identification from a second person present at the home. As agents accompanied the second suspect to retrieve the identification, components of a meth lab were visible in one of the rooms of the mobile home. Two other suspects were also discovered to be in the home.
Due to the volatile nature of meth labs, agents evacuated the residence and obtained a search warrant for the property.
As agents executed the search warrant, an item believed to be an active meth lab was located as well as crystal methamphetamine valued at approximately $1,000.
All four suspects at the residence were arrested and charged with unlawful possession of controlled substance, unlawful possession of drug paraphernalia and first-degree manufacturing of a controlled substance.
Karissa Carroll, 19; Sena Daw, 22; Josh McCormick, 26 and Sandra Walston, 38, all of Lot 1 3672 Hwy. 29 in Brewton.
The four were transported to the Escambia County Detention Center and booked on the multiple charges against them.
As of press time Tuesday, no bond had been set for any of the four suspects.

TRM to get facelift